A confident Kolkata Knight Riders outfit will hope to get past Somerset on Wednesday in their bid to qualify for the main stage of the Champions League Twenty20. 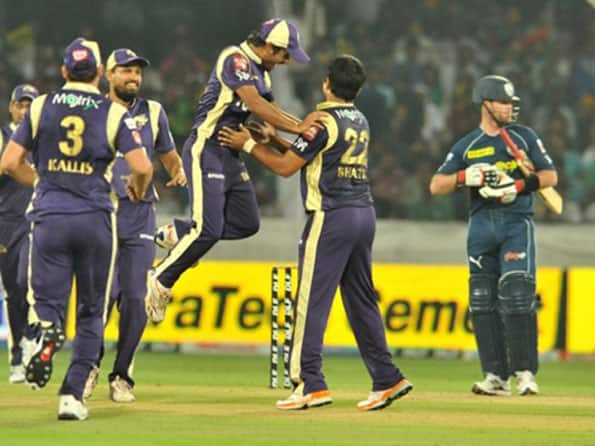 A confident Kolkata Knight Riders outfit will hope to get past Somerset on Wednesday in their bid to qualify for the main stage of the Champions League Twenty20.

The Shah Rukh Khan co-owned outfit are upbeat after winning a low-scoring encounter against New Zealand side Auckland Aces by two runs on Monday.

While the KKR bowlers need to be lauded for being able to restrict Aces under 121, their batsmen save openers Manvinder Bisla and skipper Jacques Kallis who scored 45 and 33 respectively. The duo added 73 for the opening stand but the likes of Yusuf Pathan, Manoj Tiwary failed to cash in on the start provided.

Yusuf however made amends chipping in with two crucial wickets while Brett Lee bowled a tight last over in pressure situation when 11 was needed and the Aussie speedster gave away only eight runs.

Somerset will be represented by seasoned Alphonso Thomas who grabbed a lot of eyeballs for his impressive performance while representing Pune Warriors in the last IPL edition. The team also has England opener Craig Kieswetter.

In another match on Wednesday, Sri Lankan side Ruhuna Eleven faces Leicestershire Foxes in a crucial match here tomorrow to qualify for the main round.

Having lost to Trinidad & Tobago in its first qualifier, Ruhuna needs to pull up its socks and put up a solid performance to win the match against Leicestershire.

The Ruhuna team was weakened as it missed the services of its key players including offie Suraj Randiv who is on national duty, their batsman T Sampath said after the match against Trinidad & Tobago.

The Sri Lankan side is now left with lone star in Sanath Jayasuriya.

With captain Mahela Udawatte and others failing to deliver the goods in the match against T&T, it was young Dinesh Chandimal who salvaged the innings.