Propped up by the massive series-levelling win in the second ODI, India will look to keep the momentum going when they go into the third one-dayer against England at Ranchi on Saturday, hoping that skipper Mahendra Singh Dhoni's first match in his hometown will prove lucky. 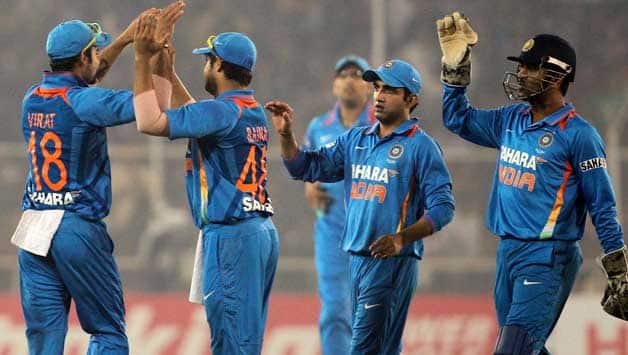 India will take on England in the third ODI at skipper MS Dhoni’s hometown, Ranchi © PTI

Propped up by the massive series-levelling win in the second ODI, India will look to keep the momentum going when they go into the third one-dayer against England at Ranchi on Saturday, hoping that skipper Mahendra Singh Dhoni‘s first match in his hometown will prove lucky.

After they fell short by mere nine runs in a high-scoring 326-run chase in Rajkot, India came back strongly in Kochi to level the series 1-1 with a 127-run win, their second highest margin of victory against England.

The manner in which the victory came for Dhoni’s men gave a fresh lease of life to the struggling outfit and it would look to take the crucial lead going into Mohali and Dharamsala.

Another destructive innings by Dhoni (72 from 66 balls) coupled with Ravindra Jadeja‘s unbeaten 61 from 37 balls set the momentum after yet another top-order failure in Kochi as England choked in the 286-run chase.

In the Kochi triumph, India finally seemed to have got the allrounder solution in Jadeja who came of age, brilliantly chipping in with two for 12 from his seven overs of left-arm spin.

Another positive was the failing middle-order batsmen’s return to form with the Suresh Raina, Dhoni and Jadeja notching half-centuries.

That Virat Kohli, going through a rare lean patch, showed some flair in his 37 would also augur well for India as the think-tank may not look to fiddle with the batting line-up, even as the poor run of Gautam Gambhir continues to baffle.

But come tomorrow, and it will be all about Dhoni when India play their first match at the skipper’s home ground.

The World Cup-winning captain has an aura about himself at the newly-constructed JSCA International Stadium Complex in the south-western fringes of the city, like Sourav Ganguly has in Kolkata.

“200 per cent I’m looking forward to it (playing at home). Its a big thing for me,” the Ranchi-born wicketkeeper batsman, who has so far played 216 ODIs since making his debut in 2004 in Bangladesh, had said.

With Dhoni being in the form of his lifetime, the ODI in his home town could not have come at a better time as it would add to the fervour the match has already generated in the state.

Amid the Indian batting ruins, Dhoni has stood tall sometimes left ploughing a lonely furrow with little support from his fellow batsmen. He has aggregated 307 runs in his last five matches at a handsome average of 102.33.

The biggest praise for Dhoni has come from his English counterpart Alastair Cook who has described the Indian skipper as the best in the world.

“He is probably the best player in the world in these situations. He does it time and time again. He’s incredibly hard to bowl at and with that extra man in the circle, it’s very, very hard to stop on these flat wickets,” Cook had said after the Kochi ODI loss.

Having thrashed more or less the same side 5-0 twice (when they toured last in 2008-09 and 2011-12), a lot would be at stake for Dhoni’s men, under heavy criticism after suffering back-to-back series defeats to England (Tests) and Pakistan (ODIs).

Most of the Indian batsmen failing collectively has been the reason for the recent slide.

On the bowling front, Bhuvneshwar Kumar took down the English top-order early on in Kochi when he removed Kevin Pietersen and Eoin Morgan in the space of three balls in an outstanding new-ball spell.

The 22-year-old also showed fine stamina, bowling his 10-over quota at a stretch and was rewarded with his best international figures of three for 29 in his fifth appearance.

Bhuvneshwar will be the key in Indian bowling as the wicket promises to offer some swing early on, even as the poor form of Ishant Sharma may prompt the think-tank to bring in Ashok Dinda.

Ishant has been a shadow of the magical spells he produced in Australia, as he has been bowling too short or wayward, leaking runs at more than eight an over.

England’s hope for a double, and a repeat of the 1984-85 series, where they won both the Tests and ODIs, would largely depend on how Kevin Pietersen performs in the next three ODIs.

The middle-order batsman is yet to convert his starts (44 in Rajkot and 42 in Kochi) in the series.

Down 0-1 in the Test series, Pietersen had turned it around with a series-levelling 186 in Mumbai to help England pocket it 2-1, their first in 28 years.

England have not won an ODI series since then, as their last best performance on the Indian soil was the 3-3 result in 2001-02.

On a Rajkot-like batting-friendly pitch at Ranchi, the opening duo of Cook and Ian Bell, who had put 158 together in the first ODI, will once again look to set the platform for the Englishmen.

In the spin department, off-break bowler James Tredwell, after an encouraging four for 44 in Rajkot, will look to relish the Indian conditions, while Samit Patel would be useful with his left-arm orthodox.