After the curtain-raiser, the first act. New Zealand and Australia, after facile wins over Kenya and Zimbabwe respectively, will rekindle their Trans-Tasman rivalry in the unfamiliar surroundings of the Vidarbha Cricket Association Stadium in Nagpur. 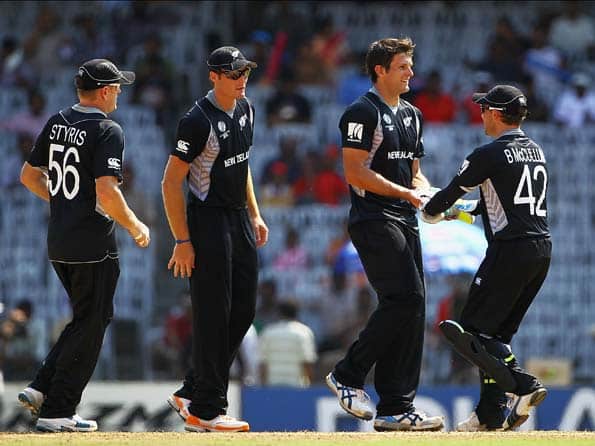 After the curtain-raiser, the first act. New Zealand and Australia, after facile wins over Kenya and Zimbabwe respectively, will rekindle their Trans-Tasman rivalry in the unfamiliar surroundings of the Vidarbha Cricket Association Stadium in Nagpur.

On paper Australia outweigh their opponents on several counts, but this match will prove an indicator of how tough the two teams are heading into the second week of the World Cup.

New Zealand were impressive in the field in Chennai, where Tim Southee was a capable spearhead and picked up three wickets and Hamish Bennett made a strong statement with four wickets.

The concern for New Zealand would be that the shaky middle order didn t get a chance to work out, as the openers hardly broke a sweat galloping to victory in eight overs. Comparatively, Australia s line-up was put to the test by Zimbabwe, so they ve had a run out in the middle.

In that match, the main contributors with the bat were Shane Watson, unsurprisingly given his form, and Michael Clarke, who scored a brisk unbeaten half-century to continue his statement of intent to critics. Brad Haddin, whom Ricky Ponting has called on to bat longer during ODIs, was scratchy and Cameron White didn’t do much.

Ponting was run out when he looked really good, and he would be better served focusing on the nets rather than LCD screens. Against a New Zealand team which bats deep, Australia s aim will be if they win the toss to put up a large total. There are few cracks in the bowling line-up, with three fast men followed by the impress Jason Krejza and Watson.

New Zealand s bowling looks good with Southee and Bennett s pace complimented by the steady medium-pace of Jacob Oram and James Franklin. Daniel Vettori needs no introduction, but more will be needed out of his spin partner Nathan McCullum.

The batting, against a revved-up pace attack, must dig deep and call on all its reserve; too often over the past season have New Zealand s batsmen caved under pressure. Its high time Martin Guptill, after a series of handsome 30s and the odd 40, crosses the fifty barrier.

Their head-to-head over the past two years favours Australia; since February 2009, they have won six of out completed ODIs (there was on no-result). Matches between the two sides have never lacked fire or drama, never mind if a few were one-sided affairs.

The match will be played on the same pitch used in Tuesday’s match between England and Netherlands, where 588 runs were scored. Batting first appears the way to go. Nagpur is expecting a sunny day on Friday with a top temperature of 31 degrees.