Wrecked by Pakistani seamers in their opening ODI match, India's under-fire cricketers will have to pull themselves up against the arch rivals when they clash in a must-win second cricket one-dayer at Kolkata on Wednesday 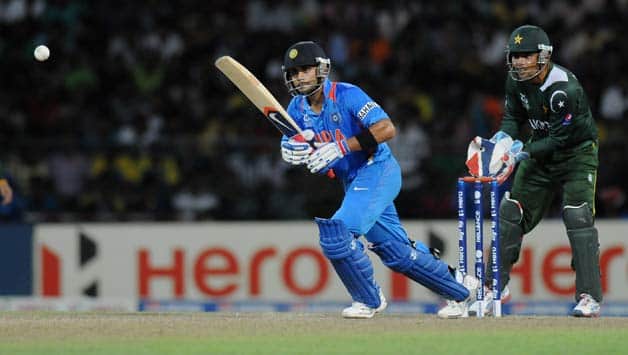 Wrecked by Pakistani seamers in their opening ODI match, India’s under-fire cricketers will have to pull themselves up against the arch rivals when they clash in a must-win second cricket one-dayer at Kolkata on Wednesday.

Pakistan pacer Junaid Khan had sucked the life out of Indian batting when his fiery spell of four for 43 in Chennai mopped up the top order and eventually set up a six-wicket victory for his team.

None of the top five batsmen could even reach a double digit figure and if it would not have been for skipper Mahendra Singh Dhoni‘s heroic unbeaten 113, things would have been more embarrassing for the hosts who are trailing the three-match series 0-1.

Another defeat tomorrow would mean India’s second series loss in less than a fortnight after England recorded their first Test series win (2-1) on Indian soil in 28 years.

With odds heavily stacked against them at Eden Gardens, a struggling India will be under tremendous pressure tomorrow to keep the three-match series alive.

It remains to be seen how captain Dhoni makes the famed top-order click with both Virender Sehwag and Gautam Gambhir struggling to give a good start to the team.

In absence of retired ODI batsman Sachin Tendulkar, senior pro Sehwag is yet to take up the challenge and lead the batting from the front.

Barring a 96 against Sri Lanka last year, he’s yet to fire since his record-breaking 219 in December 2011.

The Sehwag conundrum is hurting India’s cause and the Delhi opener will need to come up with a sizzling innings to give India a dazzling start, something that more often than not translates into a big win.

Considering that Sehwag, who did not play the T20Is, specially figured in India’s ODI scheme of things, his return to form will be the need of the hour.

“When the senior player like Sehwag comes into the side, when he is specially picked for the series, he needs a go ahead,” Dhoni said indicating that Sehwag will remain at his slot.

Virat Kohli too is going through a mini-slump and it has only added to India’s misery. Kohli had injured his foot in Chennai and there’s a cloud of uncertainty over him but India would want the promising right-hander to be back in his usual number three.

Barring Yuvraj Singh who had set up India’s series-levelling T20 International win in Ahmedabad with his 36-ball 72, India’s batting has been a picture of inconsistency.

But the skipper has backed his famed batting line-up despite the prolonged lean patch.

“All of Indian top-order were bowled which means that the deliveries were good. You can’t really question the talent of our top order,” Dhoni said, giving credit to Pakistani pacers in Chennai.

“Honestly, there was plenty for the bowlers in the initial period. They bowled in the right areas and exploited the conditions.”

Promising batsman Ajinkya Rahane has been warming the bench and may get a chance to play tomorrow in case Kohli does not recover from his injury.

Dhoni might have drawn severe criticism in the wake of defeat to England, but the skipper has maintained his ‘ice-cool’ demeanour in leading from the front as he showed in his unbeaten century to take India to 227 from 29/5.

But Dhoni stressed on the need to avoid such a situation in future.

“Actually, you don’t want a situation for your number six or seven (batsman) to score a 100… You want your top order to perform,” he said.

In the bowling department, India would like young Bhuvneshwar Kumar swing the ball with his fine pace, while in spin department Ravichandran Ashwin will be the key as the home side would look to keep the same three-plus-one pace-spin combination, that means local lad Mohammad Shami Ahmed may have to wait for his first ODI cap.

The Pakistani camp, on the other hand, have an all-win record against India from three matches at the Eden Gardens and they would look to wrap up the issue here.

The pace battery of Umar Gul, Junaid Khan and Mohammad Irfan will once again look to bowl full throttle and exploit India’s weakness.

Irfan had pulled a hamstring under muggy conditions of Chennai and it remains to be seen whether the 7-feet 1-inch frame speedster figures in the ranks.

But all eyes would be on left-arm pacer Junaid as he would look to give early breakthroughs with the new ball.

The only concern for skipper Misbah-ul-Haq would be to improve their death bowling performance that had conceded 81 runs in Chennai as India could recover to 227.

Even in Ahmedabad T20I, where their bowlers had conceded 74 runs in last five overs, it had hurt Pakistan’s cause as India levelled the series with a 11-run victory.

“We have to really improve our fielding and bowling in the death overs and Power Play. When two batsmen are set, it is difficult to bowl at them like it was Dhoni (in Chennai),” Misbah said.

Bolstered by the return of experienced pro Younis Khan in the one-dayer, Pakistan doesn’t not have many concern in batting. Their top batsmen of Mohammad Hafeez, Nasir Jamshed Shoaib Malik are also among runs and Pakistan would look to get going.

Youngster Nasir has shown fine qualities of an opening batsmen as he guided Pakistan to a six-wicket win with his 101 not out. He would look to continue from where he’s left and give Pakistan a solid start.

Even as it’s a noon start, dew would be a concern in this part where sun sets early. The pitch will have plenty in it for the batsmen, promised curator Prabir Mukherjee.

“It’s a typical one-day batting friendly wicket. Batting first upon winning the toss would be a wise decision,” he added.