Preview: RCB take on Somerset in a must win encounter

Preview: RCB take on Somerset in a must win encounter

Frustrated after two successive defeats, Royal Challengers Bangalore will aim for redemption when they take on a spirited Somerset in their Champions League Twenty20 group B game at the M Chinnaswamy stadium here on Monday. 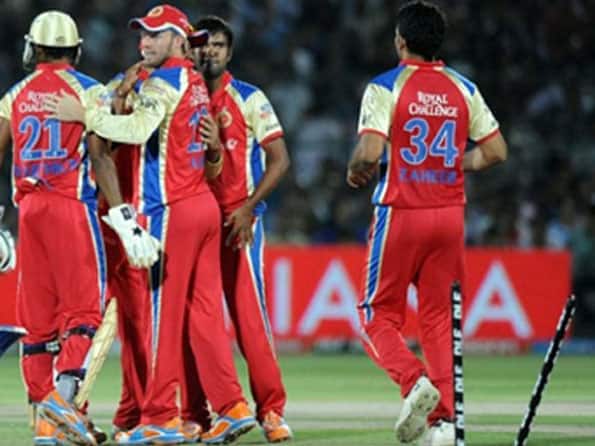 RCB need to win all their remaining matches starting with Somerset, if they have to stay in contention for the CLT20 semis AFP

Frustrated after two successive defeats, Royal Challengers Bangalore will aim for redemption when they take on a spirited Somerset in their Champions League Twenty20 group B game at the M Chinnaswamy stadium here on Monday.

Royal Challengers may have lost their games against Warriors and Kolkata Knight Riders but they are not out of the reckoning for a place in the semifinals.

Warriors, with a better net run rate, are leading the table with four points while Kolkata, who are placed second with four points, have finished their league engagements.

Bangalore’s passage into the semis could be more demanding as they require big victories against Somerset and South Australia Redbacks. If they do so, they could improve their net run rate which could put them in contention for a spot in the semis.

The RCB top-order, which came a cropper in the last two outings, needs to live up to its reputation. If Chris Gayle.

If they don’t, the going would be tough for RCB who have disappointed their home fans.

Gayle got off to aggressive starts against Warriors and Knight Riders, but failed to convert them into big scores.

Skipper Daniel Vettori would be hoping that the Jamaican bats as well as he did during the last edition of the IPL.

Gayle had scored in the excess of 600 runs in 12 IPL matches, smashing as many as 44 sixes.

Kohli made a crisp 34 in the first match but fell for a blob in the contest against Knight Riders. The flamboyant right-hander will be seeking to make an impression in the do or die game.

Though Saurabh Tiwary, Mayank Agarwal and Mohammed Kaif have the potential to be match-winners, they have failed to get going in the CLT20. Tiwary could be accused of throwing his wicket away after making breezy starts.

It will be crucial that RCB fire as a bowling and fielding unit. While their bowling has been far from impressive, their fielding has been pathetic.

Bowling coach Venkatesh Prasad felt his boys were well prepared after an intense training program but it remains to be seen how they perform.

Somerset have come into the tournament with strong shows in the qualifiers and made a clean start to the main draw with a win to remain unbeaten in the league.

On Saturday, their match against South Australia Redbacks was abandoned without a ball being bowled due to heavy rain.

With three points in their kitty, a win on Monday will pitchfork them into the semifinals.

For the visitors, Roelof van der Merwe has been an inspirational force, with an impressive all-round show against Knight Riders.

If Merwe repeats his heroics, Somerset could augment their chances of qualifying for the semifinals from group B.

If they hold their nerves and bowl in the right areas, they could spell trouble for the struggling RCB batting line-up.(PTI)

No DRS for Bangladesh-West Indies series