Buoyed by the resounding 126-run triumph in the opening game, India will seek to maintain their supremacy as they go into the second cricket one-dayer against England on Monday with the focus on grooming the young brigade. 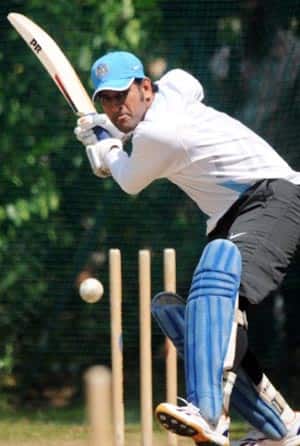 Buoyed by the resounding 126-run triumph in the opening game, India will seek to maintain their supremacy as they go into the second cricket one-dayer against England on Monday with the focus on grooming the young brigade.

The emphatic victory in Hyderabad will no doubt serve as a huge morale-booster for the team which failed to win a single international match during their recent nightmarish tour of England.

Mahendra Singh Dhoni and his men have taken the first step in their redemption journey by taking a 1-0 lead in the five-match contest but will have to guard against complacency against the visitors who have vastly improved as an ODI team.

The hosts will seek to exploit the home conditions and it will be interesting to see how England, who had come here well in advance to get acclimatised to the conditions, respond to the challenge in what has been dubbed as the ‘payback series’.

The Indians gave a good account of themselves in Hyderabad despite the injury-induced absence of a host of seniors, including Sachin Tendulkar, Virender Sehwag and Zaheer Khan, and indications are that they may retain the winning combination.

With an out-of-form Harbhajan Singh dropped for the first two matches of the series, India have a rather inexperienced bowling attack with paceman Praveen Kumar being the most experienced.

The spin duo of R Ashwin and Ravindra Jadeja, who scalped three wickets apiece in Hyderabad, will again have a big role to play at the Ferozeshah Kotla where the track was expected to assist the slow bowlers.

The presence of all-rounder Jadeja has provided balance to the team and has given Dhoni the luxury of an additional bowler.

“Jadeja is an important player as he brings in a lot of stability to the side,” Dhoni said.

Umesh Yadav, who was preferred ahead of Varun Aaron, in the first match, is not the most accurate of bowlers but can be dangerous if he gets his rhythm and certainly brings in a lot more pace to the bowling attack.

The heartening feature of India’s batting in Hyderabad was the blistering knock by captain Dhoni, who showed glimpses of his powerplay of younger days.

With Gautam Gambhir returning to the team, the hosts have a decent batting line up with the likes of Suresh Raina and Virat Kohli, both of whom are regarded as highly-talented ODI players.

Ajinkya Rahane has also proved that he has the skills to succeed at the highest level and the young batsman will be keen to prove his worth after failing to get going in the first match. Parthiv Patel is also fully capable of scoring runs at a brisk pace.

Clearly, the pressure will be on England who have never really excelled in sub-continental conditions where the balls tend to keep low.

But this English team has shown a lot of character and are fully capable of bouncing back in the series as they have a host of quality batsmen and bowlers Captain Alastair Cook has urged his teammates to learn from the Hyderabad debacle and come harder at the Indians.

“We were outplayed in all three departments. We gave away around 180 runs in the last 20 overs and I think that was 30-40 runs more than what we had expected to restrict them to. We were also unusually sloppy in the field,” Cook said.

“It was an important toss to win, we saw at the end that the ball kept low. We’re going to have to learn from this, and that’s the beauty of a five-match series,” he said.

England have a good batting line up with stars such as Kevin Pietersen, Jonathan Trott and Cook besides a clutch of talented youngsters and it appears unlikely that they will collapse in every match.

The toss will be vital considering the dew factor that may come into play in the day-night encounter at the Kotla. In case there is dew, the team bowling second may find it difficult to grip the ball.

Ravindra Jadeja says he wants to grab every opportunity