Stung by the upset defeat against minnows Bangladesh, India will be under immense pressure when they go into their must-win last Asia Cup league match against arch-rivals Pakistan here Sunday with bowling in the slog overs continuing to be a big worry. 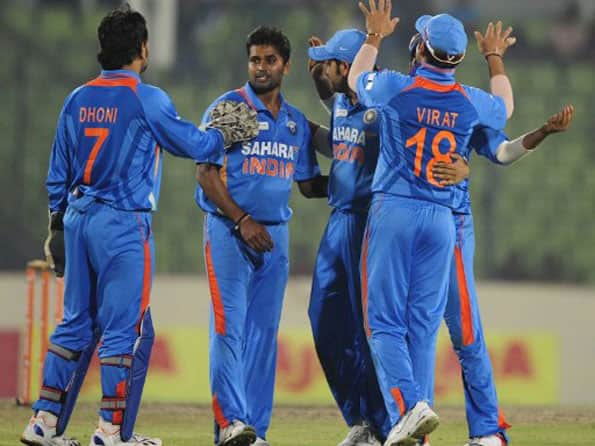 Stung by the upset defeat against minnows Bangladesh, India will be under immense pressure when they go into their must-win last Asia Cup league match against arch-rivals Pakistan here Sunday with bowling in the slog overs continuing to be a big worry.

The Indians have no option but to put it across their traditional rivals to stay alive in the tournament as the shock defeat against Bangladesh has thrown their campaign into jeopardy.

The stunning defeat against Bangladesh would have certainly hurt the Indians, especially Sachin Tendulkar whose phenomenal feat of scoring the 100th international ton went in vain. But they have to regroup quickly and put the debacle behind them.

Pakistan, on the other hand, have already secured a berth in the final with victories over Bangladesh and Sri Lanka and will be under less pressure unlike the Indians.

The Indians have generally managed to lift their game when they take on their bitter foes and it remains to be seen whether Mahendra Singh Dhoni and his men can upstage the Pakistanis in what promises to be a thrilling contest under lights at the Sher-e-Bangla National stadium.

Now that Tendulkar has completed the historic 100th international century after a frustrating year-long wait, the champion batsman will be mentally more relaxed and that could allow him to play more freely.

Tendulkar has a good track record against Pakistan and will be determined to make an impact on Sunday.

While the Indian batting has done reasonably well in the Asia Cup after struggling on the bouncy Australian tracks, it is the bowling which has been a cause of concern.

The pacers — Praveen Kumar, Irfan Pathan, Vinay Kumar — have not been consistent enough in the death overs on these flat sub-continental tracks while the spinners like R Ashwin and Ravindra Jadeja have been patchy.

The Indians have to quickly sort out their bowling woes as any mistake Sunday could see the team bowing out of the tournament.

Despite the inconsistent show by the bowlers, Indian captain Dhoni said he has faith in them and that they would learn from their mistakes.

“The bowlers have talent, it is there. They just need to execute plans with consistency. The youngsters will learn more. They will start performing. They felt the pressure in the game against Bangladesh,” Dhoni said.

“They (Bangladesh) played better cricket throughout. They began well and capitalised on that. They made sure they spent time on the crease. At the start of the Powerplay our bowlers felt the pressure and crumbled. A a bit more runs on the board would have been better,” Dhoni said.

“Bangladesh can play really well on their day, they used the conditions well, their reverse swing bowling was good. And they got the partnerships going.” he said.

While India’s top order batsmen have got the runs, Rohit Sharma, who failed miserably during the tour of Australia reently, did not score much against Bangladesh and it would be interesting to see if he is retained in the team.

Manoj Tiwary, who did not get to play a single match during the tri-series in Australia, has been waiting in the wings for much too long and the team management could consider him as a replacement for Rohit.

Paceman Vinay Kumar had to sit out of the last game against Bangladesh because of a niggle and it remains to be seen if he is fit enough to take the field on the morrow. In case he is not fit, Bengal pacer Ashok Dinda, who was trifle expensive in his second spell, could be retained.

Although Pakistan have won both their matches, they have some problem areas as well.

The batting has not been consistent enough and they have lost wickets quickly at the top of the order, which they need to rectify.

Opener Mohammad Hafeez has been in good form but the other opener Nasir Jamshed has to be a little more consistent alongwith the seasoned Younis Khan who has not yet made an impression in the tournament.

The Pakistani bowling has been quite impressive, especially spinner Saeed Ajmal who has bamboozled the batsmen with his variety. The pacers Umar Gul and Aizaz Cheema have also been among the wickets.

Pakistan captain Misbah-ul-Haq knows that the pressure will be squarely on India and can treat the game as a preparation for the March 22 final.

Having already booked a berth in the final, Misbah wants his batsmen to show more consistency in order to win the tournament.

“We have to be more consistent as a batting unit. The bowling has always kept us in the hunt. Especially, if you have a world class bowler like Saeed Ajmal in your team, its a big edge,” Misbah said.(PTI)

Its selfish to retire when on top: Sachin Tendulkar