A series where plenty of attention has been given to absent West Indies players concludes with the focus on England resting spearhead seamer James Anderson from the third Test at Edgbaston. 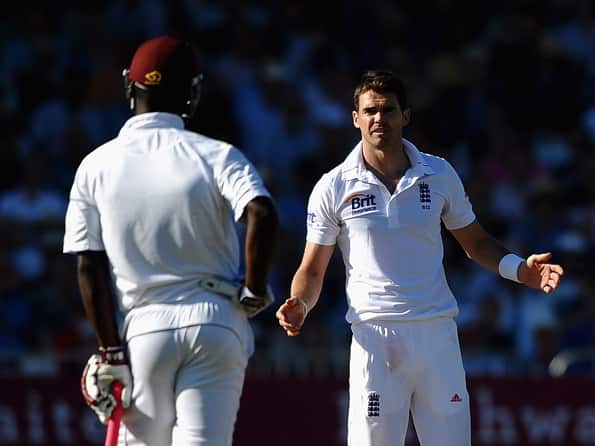 A series where plenty of attention has been given to absent West Indies players concludes with the focus on England resting spearhead seamer James Anderson from the third Test at Edgbaston.

In rising to number one in the world Test rankings, England have rested players along the way — Anderson missed the 2010 tour of Bangladesh.

The difference now is that the Lancashire star doesn’t want a break.

But the concern for England is the sheer amount of cricket they have left this season — four Tests (three against South Africa who will be challenging them for top spot in the rankings), 14 one-day internationals and four Twenty20s.

And then comes the defence of their World Twenty20 title in Sri Lanka and a Test tour of India.

England, 2-0 up in the three-match series, do have capable seam bowling reserves in Steven Finn and Graham Onions and both could be in the side on Thursday if the selectors opt to give Anderson’s new-ball partner Stuart Broad a rest as well.

Anderson, in his Sunday newspaper column, made it clear he wanted to play at Edgbaston but England coach Andy Flower insisted now was the right time for him to take a breather.

“We came into this series with one goal, and that was to win the series,” Flower said Tuesday.

“I’m not intending to demean the importance of this Test — but since we won the series already, our priority does now shift to the South Africa series.”

Flower, a former Zimbabwe batsman, likened Anderson’s position to that of a thoroughbred racehorse, saying: “Would you enter your prize horse in every race through the year?

“You wouldn’t — you would target the races you want to win. We’ve won this race already.

“I perfectly understand the reasons why he (Anderson) is disappointed…but it is beneficial to him in the long run.”

“If they rest six players and we win, it’s still West Indies vs England and we don’t really care how many people they rest,” he said.

Meanwhile opener Adrian Barath was glad to see the back of Anderson, saying Tuesday: “Any opener would say the same. It was really a challenge facing him.”

But Gibson warned against thinking life was about to get any easier for a top order whose struggles were exemplified by their collapse to 61 for six in the second innings of a nine-wicket second Test defeat at Trent Bridge.

“We haven’t made any substantial runs as a batting side for people to be resting on their laurels,” said Gibson, whose side were without senior batsmen and former captains Chris Gayle and Ramnaresh Sarwan after their respective disputes with the West Indies Cricket Board — although whether they would have changed the course of this series is a debatable point.

“We still have batsmen that have to prove they can play cricket in these conditions.”

Former England bowling coach Gibson added: “Steven Finn has had a very good stint in Test cricket since he’s come on board, Graham Onions made his debut against West Indies in 2009 and got five wickets at Lord’s.”

West Indies, who’ve won just two of their last 32 Tests and haven’t enjoyed a Test win in England for over a decade, suffered a blow when Kemar Roach, their most hostile fast bowler, dropped out of the tour with a shin problem last week.

He has been replaced by Sunil Narine, the ‘mystery’ spinner who could make his Test debut on Thursday after starring for champions Kolkata Knight Riders in the Indian Premier League.

But even Narine could do with some runs to bowl against.

Kirk Edwards’s nightmare trip continued when he was out for a fourth duck of the tour against Leicestershire last weekend.

Edwards has managed just 20 runs from eight innings and West Indies may decide there is little to be lost in selecting either Narsingh Deonarine or Assad Fudadin instead. (AFP)

Pakistan players have to sign tour contracts with PCB