Indian cricket s latest entrant, Prithvi Shaw struck a hundred to become the youngest Indian to score a century on Test debut 18 years and 329 days. Shaw scored his maiden hundred off 98 deliveries with 15 fours, shortly after lunch on the opening day of the first Test between India and West Indies in Rajkot. The feat also made Shaw the 15th Indian to register a century on debut. Rohit Sharma was the last to do so, also against the West Indies in 2013.

After Sachin Tendulkar s debut in 1989, Shaw is the first Indian specialist batsman to have been given a Test debut at such a young age. Harbhajan Singh was 18, Piyush Chawla and Parthiv Patel 17 and Ishant Sharma 19 when they played their maiden Tests, but none was a batsman in particular.

Shaw batted with the assurance of a seasoned pro to turn a scoreline of 3/1 following the loss of KL Rahul for a duck in the opening over into a dominant one, while producing numerous shots that dripped with the memories of the man he has often been compared with – the great Tendulkar. That s not all. At the age of 17, Shaw became the youngest player to score a century on Duleep Trophy and Ranji Trophy debut, a record previously held by Tendulkar.

Shaw s first runs in Test cricket came with a delicate push into the covers for three, his first boundary a cracking slap past point of Keemo Paul. In Paul s second over, Shaw unfurled three boundaries: a stunning flick off the pads, a glance to fine leg and a slash over the slips. Each shot had the Tendulkar stamp, and in no time Shaw was 22 off 16 balls.

After a period of singles, Shaw moved from 34 to 42 in the span of three balls, with two boundaries off Paul in the pacer s second spell, each with sparkling timing. His fifty came up off his 56th ball faced, a straight drive off Roston Chase being received by loving cheer from the few spectators gathered at the venue. In Chase s next over, Shaw put away a half-tracker and a floated-up delivery to the extra cover boundary in succession, and with growing disdain.

List of Indian cricketers to score a century on debut 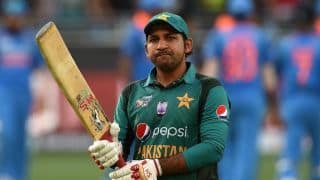