Prithvi Shaw Has The Ability of Virender Sehwag But Needs to Be More Disciplined Off The Field: Wasim Jaffer

Prithvi Shaw Has The Ability of Virender Sehwag But Needs to Be More Disciplined Off The Field: Wasim Jaff

Branded as 'Tendulkar Clone', Prithvi Shaw made a dazzling entry into Test cricket, hitting a century on debut

Former India international and domestic stalwart Wasim Jaffer has drawn comparisons between Prithvi Shaw and batting legend Virender Sehwag but feels the former needs to maintain a more disciplined lifestyle off the field to succeed at the international level.

Branded as ‘Tendulkar Clone’, Shaw made a dazzling entry into Test cricket, hitting a century on debut against West Indies in 2018. However, last year he has handed a backdated eight-month doping ban by the BCCI.

The young Mumbai batsman made his international comeback earlier this year making ODI debut in New Zealand where again he put on display glimpse of his immense potential.

Jaffer, who announced his retirement earlier this year, feels Shaw has the game to dominate bowlers like Sehwag but discipline is an area that requires improvement.

“I also feel his lifestyle off the field, he (Shaw) needs to probably get more disciplined there. He has the game to succeed at the international level but he needs to be a lot more disciplined outside cricket also,” Jaffer Aakash Chopra during an interview on the latter’s YouTube channel.

“I think he is a special player, without a doubt and the (kind of) shots he plays. If he gets going, he has the ability of Virender Sehwag, who can completely demolish the attack,” added Jaffer, who announced his retirement in March this year,” he added.

Jaffer, the most prolific run-getter in Ranji history, has a word of advise for Shaw regarding his game too. 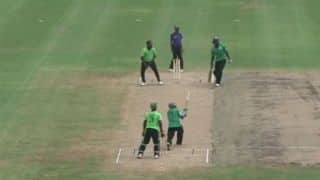