Prithvi Shaw has scored 5 First-Class centuries from 9 matches since his debut in January 2017.

Prithvi Shaw achieved stupendous success in First-Class cricket in 2017. He made his First-Class debut when Mumbai took on Tamil Nadu in the semi-final of 2016-17 Ranji Trophy. Since, his tryst with centuries began. He slammed 120 on debut. His next century came with a 154 in Duleep Trophy final for India Red against India Blue. He was, however, unstoppable in the ongoing 2017-18 Ranji Trophy scoring 3 centuries and piling 537 runs at 48.81 from 6 matches for Mumbai.

He was asked not be part of the U-19 Asia Cup squad considering the success he was drawing for Mumbai. Mumbai, however, could not go past the quarter-final stage in the ongoing Ranji Trophy, Prithvi was chosen as the India U-19 captain for 2018 World Cup. During a press conference ahead of the Under-19 India’s departure to New Zealand on Wednesday, Prithvi believes his Ranji Trophy performance will come handy at the bigger podium.

He is also positive that India will shine in the World Cup, It is a very good opportunity for us since we have been working hard for the last 3 years. As a captain I want to take the entire team along, I have trust on my team. Ranji Trophy performance will help me in my batting for U-19 World Cup, as quoted by Indian Express.

The U-19 team will be continued to be coached by Rahul Dravid who was also present in the press conference. Dravid backed the young side to bring success for India, We have a good balance side. We have quality batting unit, few boys have played Ranji Trophy. We have good team. I believe at this level you cannot predict who will make it higher level. All have potential ability to play for state and Indian team.

The tournament will go underway from January 13. India will play their first game against Australia on January 14 followed by match against PNG and Zimbabwe on January 16 and 19 respectively. 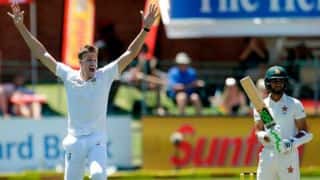