Prithvi Shaw will do well in Australia: Sourav Ganguly

Prithvi Shaw will do well in Australia: Sourav Ganguly

Shaw created history to become the youngest Indian player to score a century on Test debut.

Prithvi Shaw proved that he belonged to Test cricket with a scintillating 134-run knock on debut during Day One of the first Test between India and West Indies at Rajot on Thursday. Shaw created history to become the youngest Indian player to score a century on Test debut.

“He will go to Australia in a couple of months. I am sure he will do well because he is a good back-foot player. You want to see young players doing well,” Ganguly told PTI on Thursday.

“It’s still early days, he will have to go the distance going around the world. But congratulations to him and I thought he was absolutely marvellous today.”

Ganguly pointed out that Shaw s temperament will help in his batting. “What stands out is the way he batted, big temperament. He dominated the bowlers on way to his hundred. Big game, first match, he just played the way he knew,” he said.

“His positivity, temperament and attitude to batting is fantastic. Playing the U-19 World Cup and playing a Test math for India is completely different. What I saw today was extremely pleasing to the eye and hopefully he can play for India for a long time.”

Shaw s incredible knock has led to many drawing comparisons with Virender Sehwag, but Ganguly said the youngster should allowed to play his natural game.

Meanwhile, when asked about whether selectors should communicated with players in the wake of Karun Nair and Murali Vijay controversy, Ganguly, the chairman of BCCI s Cricket Advisory Committee, said: “I don’t know the team dynamics as I have not been involved with the team for a long time.

But it’s important that the selectors communicate with the players as the players are very sensitive when they play. Murali Vijay has done extremely well for India. He has had a couple of failures in England but hopefully they (selectors) communicate,” he said. 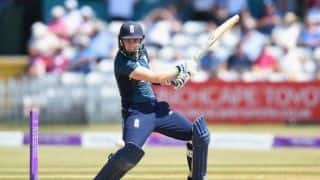