Pralhad Joshi who is Karnataka state BJP President has desired Central Bureau of Investigation’s (CBI) enquiry into the betting racket (which runs in many crore of rupees) that has plagued the game of cricket. A press meeting was held on 16th of August, in which Joshi voiced his concern, “Looking at the amount of cash and gold jewellery seized from a flat owned by the senior IAS officer Kapil Mohan, I personally think that a few persons part of the government have a role to play in the racket. So, the probe into cricket betting scam should be handed over to the premier investigation agency.” READ: Cricket betting needs government measures to be controlled, says SIT

In a conversation with Deccan Herald, Jagdish Shettar who is the Leader of Opposition in assembly complained, “It looks like IAS officers are looting the State. If the probe into the cricket betting racket is handed over to the CBI, kin of an influential minister in the State Cabinet will be exposed.” According to Shettar there were more than 820 cases against IAS officers after the Indian National Congress had come to power in Karnatka. He added that to shield the corrupt officials the Congress party had then delegated an IAS officer as Registrar of Lokayukta. 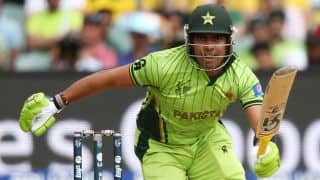