Prosper Utseya turned the game around by taking a hat-trick in 27th over.

South Africa set Zimbabwe a target of 232 in the third One-Day International (ODI) of the triangular series at Harare. South Africa were cruising at 142 for no loss, when Hashim Amla charged down the pitch to Prosper Utseya and failed to connect. Brendan Taylor made no mistake collecting the ball and dismantling the stumps. Amla was out stumped. Two overs later Utseya turned the game around on its head. He took a hat-trick to send the trio of Quinton de Kock, Rilee Russouw and David Miller back to the pavilion.

The team which had come into the match, losing six ODIs in a row needed something magical to go their way, and Utseya provided just that. However, one man’s dream, can be another man’s nightmare. Rilee Russouw became the second man since Nathan McCullum to score two golden ducks in his first two matches.  JP Duminy and Faf du Plessis couldn’rescue the Proteas, and fell shortly after the hat-trick.

Earlier, Hashim Amla and Quinton de Kock had combined well to give South Africa a strong start. Both batsman scored fluent half-centuries, but their performances may not be enough as Zimbabwean batsman will take the field to reach the target of 232. 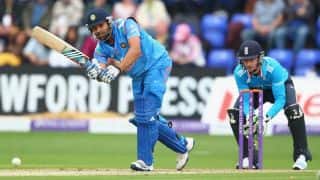 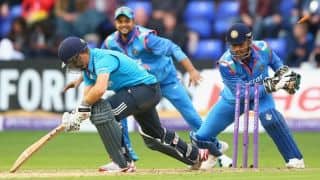 India vs England 3rd ODI at Trent Bridge preview: Visitors can go for the kill