Kapil said it was heartening to see India producing such world-class fast bowlers.

The legendary Kapil Dev on Thursday heaped praise on India’s current pace battery, saying the fast bowlers have changed the face of Indian cricket in the last four-five years.

Asked whether the current pace attack is the best, Kapil said, “Do I have to say that?

“Aisa pace attack humne dekha nahi tha, socha bhi nahi tha (we have not seen such a pace attack and never thought about it). So, one does not have to say anything and yes without any doubt, in the last four-five years the fast bowlers have changed the face of Indian cricket,” he said.

In the absence of Bumrah, who has been ruled out of the ongoing Test series against South Africa due to a stress fracture in his back, Shami stood up and ran through the visiting team’s batting line up in the first match in Visakhapatnam.

“No issues about that (not being in the top 10 bowlers). How effective he (Shami) has been for the team is more important. You have seen him. Great to see him doing well and that’s the bottom line,” Kapil said during a promotional event on Thursday.

READ: For us to be the No. 1 team, we have to accept any conditions: Bharat Arun

Kapil said it was heartening to see India producing such world-class fast bowlers. “Today it is about their life. I am proud of the quality of Indian fast bowlers. They have come in numbers,” he said.

“It takes time to develop a pace attack. It feels good to witness the amount of cricket that is being played now. Because of IPL so many fast bowlers have got an opportunity,” he said.

“When you play more cricket, more players will come up. It is important to give youngsters opportunity to show their talent.”

The former World Cup-winning skipper also praised India’s bench strength. He said it was pleasing to see Rohit Sharma finally making his mark in Test cricket. “It is good to see he (Rohit) getting runs,” he said.

Kapil also feels that it should be left to MS Dhoni to take a call on his future in consultation with the national selectors. “That is his (Dhoni’s) call. How can we say anything about his future? He has to take a call or the selectors have to take a call. He is a such a great cricketer,” he concluded. 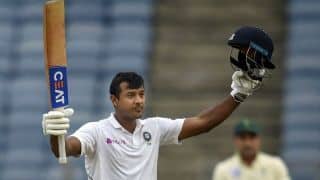