Pakistan cricket was marred by the menace of fixing after allegations of spot fixing in the first match of the PSL Season 2.

Karachi: Pakistan Cricket Board (PCB) president Najam Sethi has said that prior to the second edition of the Pakistan Super League (PSL), they did have indication that corruption might take place in the league. The Pakistan cricket was marred by the menace of fixing after allegations of spot fixing in the first match of the PSL Season 2 between Islamabad United and Peshawar Zalmi in Dubai in February.

In an exclusive conversation with pakpassion.net, Sethi said, “When the second edition of the PSL came along, we did have some prior indication that such corruption could happen and so we were technically and mentally prepared for such an eventuality.” “However, to be totally honest, I did not expect that such an issue would come to light in only the first match of the tournament. Literally within 48 hours of the start of 2017 PSL, we were faced with this situation which was shocking. But when it did happen, the evidence that I saw was sufficient to convince me that what we suspected was true,” he added.

Left-handed batsman Sharjeel Khan, who scored a single off four deliveries including two dot balls during that match, was recently banned for a period of five years by the PCB Anti-Corruption Unit in connection with PSL spot-fixing case.

Sharjeel was facing five major charges of breaches of the PCB’s anti-corruption code and was found guilty for all five.

“As we can see, the charges against Sharjeel Khan have all been proven and the punishments meted out. We will review the judgement in detail and if we think that they are lenient, we will seek stiffer sentences,” Sethi said.

Sharjeel, Khalid Latif and Shahzaib Hasan are facing charges for a number of breaches of the anti-corruption code of the PCB while playing for their respective teams in the PSL.

Mohammad Irfan and Mohammad Nawaz, who were also accused, have already received their punishments and have been suspended for failing to report offers to fix.

Nasir Jamshed is other player involved in the scandal. 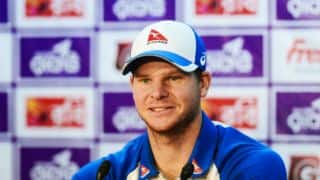