Broad was the co-owner of the pub, Tap & Run, along with former teammate Harry Gurney.

New Delhi: In an unfortunate incident, a pub co-owned by England pacer Stuart Broad was ravaged by fire, according to a report in mirror.co.uk. Broad was the co-owner of the pub, Tap & Run, along with former teammate Harry Gurney. The fire broke out on Saturday night, and it took eight fire tenders to bring the flames under control.

“The Tap & Run in Upper Broughton is run by The Cat & Wickets Pub Company, which Broad launched in 2016 along with his former England and Nottinghamshire teammate Harry Gurney. The fire was first reported at 3.22 am (GMT) on Saturday after breaking out in the roof and on the first floor of the pub,” the report said. Fortunately, no casualty was reported from the incident. However, the roof and the first floor of the pub were badly damaged by the fire.

Stuart Broad, who is playing the second Test against New Zealand, and his partner Gurney released a statement and said that they are heartbroken by the incident.

“We’re absolutely devastated to report that a fire broke out in the pub during the night. We are heartbroken to see our beautiful pub up in flames. We are so sorry that we will be unable to honour any bookings for the foreseeable future and sorry for any distress that the fire has caused to villagers. We will keep everyone updated on social media in the coming days and weeks.”

Speaking about the second Test, New Zealand is in complete command of the game, having posted a daunting first inning total of 553, courtesy of a magnificent 190 by Daryl Mitchell and 106 by Tom Blundell. Broad was not at his best in the first innings and conceded 107 runs in 26 overs, picking just two wickets. The Three Lions are 90-1 in their reply, trailing by 463 runs. 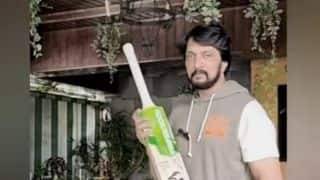