The formalities are over. The Associates are gone. There is no room for favours. The real tournament starts tomorrow, in Mirpur, with Pakistan facing West Indies. It has been argued that West Indies have the mental strength of jelly, and thus, against a Pakistan team prone to combustion under pressure, we have a potentially crackling contest on the cards. 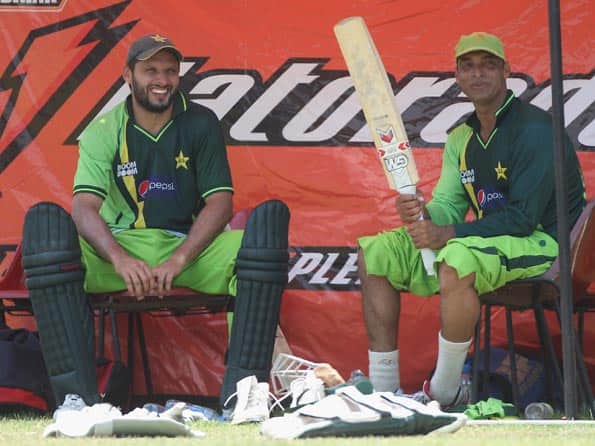 The formalities are over. The Associates are gone. There is no room for favours. The real tournament starts tomorrow, in Mirpur, with Pakistan facing West Indies. It has been argued that West Indies have the mental strength of jelly, and thus, against a Pakistan team prone to combustion under pressure, we have a potentially crackling contest on the cards.

Two unpredictable teams starting off the quarter-finals of what has been an exciting World Cup – just how did it come to this? Pakistan entered the tournament having been exiled from playing international cricket at home for two years, dogged by match-fixing and player instability and with much speculation over who would lead them. As it panned out, they played their exhilarating brand of cricket and topped Group A, ending Australia s 12-year unbeaten World Cup run in the process. It s been some ride, but now it goes uphill.

Pakistan have been carried by their charismatic leader Shahid Afridi s bowling and inspired captaincy, by Umar Gul s incisive bowling at the start and during the latter stages, by Younis Khan s calm presence, and by Umar Akmal s adrenalin-fuelled innings. They have been let down by their openers, in particular Ahmed Shehzad who was discarded for the last two matches, and by Shoaib Akhtar, who has announced his retirement after the World Cup. Their spinners, Afridi apart, have been tidy, while Kamran Akmal has given Pakistan a migraine the size of Islamabad with his atrocious wicketkeeping. In a do-or-die scenario, Pakistan cannot afford any slips, and thus remain a fascinating side to watch. You never know which Pakistan will turn up on the day.

The manager Intikhab Alam s assertion that the team was peaking at the right time and that Pakistan were the more consistent outfit is certainly borne out by facts, but all that will count for little in a knock-out game.

West Indies lost their group game to South Africa, but it was a subsequent reverse against England that pushed them to the brink of elimination. It needed South Africa to beat Bangladesh to seal West Indies progression to the quarter-finals, and all signs indicate that they seem to be falling apart after two inexplicable defeats from dominant positions. Against England, West Indies were 222 for six chasing 2244 when they lost four wickets for three runs. Against India, they lost eight wickets for 34 runs after being a very comfortable 154 for two.

This team has shown plenty of promise, with the likes of Chris Gayle, Kieron Pollard, Ramnaresh Sarwan, Devon Smith, Suleiman Benn and Kemar Roach contributing to wins, and fringe players such as Andre Russell and Ravi Rampaul exciting in defeats to England and India respectively.

Gayle missed the last match due to a recurrence of the abdominal strain that ruled him out of the England game, while Roach also sat out the India defeat because of a mild fever. The management is counting on the pair to be fully fit for the quarterfinals, which is why they were rested for Sunday’s match. With bat and ball, at the start of either innings, Gayle and Roach are explosive components and how they fare against Pakistan is perhaps the biggest aspect for West Indies.

Pakistan will certainly fancy their chances against a side that they’ve beaten 51 times in 89 matches 35 defeats and Afridi believed that Pakistan had the advantage of being more at home in Mirpur despite not having played a match there yet. “I’m sure that Bangladesh will be a similar story,” he said. “The crowd their supports the Pakistan team and they will be backing us now that their own team is not playing in the quarterfinals. The conditions in Mirpur, will be home-like, I’m sure.”