"Even on pitches that assisted pace and bounce they did well. They were just too good."

Explosive South African batsman Quinton de Kock today avowed that the Indian pace attack was one of the best in the world and it would severely test the England batsmen in the own backyard. India will embark on England tour in July to play a three-match Twenty20 series, three-match ODI series and five-match Test series.

“I think it’s going to be a good contest. The Indian seam attack is one of the best that I have ever faced. They are really good. The likes of Bhuvi (Bhuvanehwar Kumar), (Jasprit) Bumrah, Hardik (Pandya), (Mohammad) Shami (and) Ishant (Sharma), all these guys were very consistent and opposing teams are going to struggle against them. They have one of the hardest bowling attacks that one can face, especially as openers,” de Kock said.

The South African keeper-batsman spoke after he launched Spintechs Spin Mat’ that would help the batters improve their skills on pitches that help spinners.

They (the Indian team) came to South Africa and played the bounce really well. That’s something that’s going to keep happening now and in the future. They are not going to be scared anymore. Even on pitches that assisted pace and bounce they did well. They were just too good.

“You have got guys like (Ajinkya) Rahane, Shikhar (Dhawan), (M S) Dhoni and Virat (Kohli) leading by example, guys who are not scared of taking on the opposition, De Kock said when asked what was the difference between the Indian team that toured South Africa early this year and the past teams.

De Kock, who plays for the Royal Challengers Banaglore, also heaped praise on his teammate and India skipper Kohli.

He also had words of encouragement for his compatriot and young pacer Kagiso Rabada saying he could be a future legend.

“He always wants to be leading the bowling attack and at 22 that’s quite scary. He could be a future legend, but as of now he’s just trying to do his best, trying to win games for South Africa and hopefully win one or two trophies.”

Turned his attention to Day Night Tests, de Kock said there were “some rough edges in the format which needed to be ironed out”.

But I think it’s a good concept but there are one or two things that can make the game better, especially for the players. For the fans it’s awesome.”

“There is a problem with the ball at certain times of the day, particularly in the twilight period. Teams should continue playing Day Night Tests and the rough edges should be ironed out over time. The onus of bringing back crowds to Test matches lies with both players and administrators. We need to work as a team, the stumper signed off. 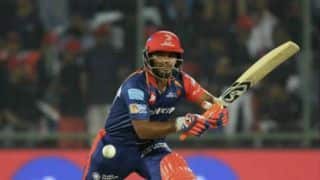