Quinton de Kock remained unbeaten on 129 off 128 balls, including 17 fours and two sixes.

Quinton de Kock‘s maiden Test century helped South Africa reach a score of 475 against England before getting bowled out on Day One of the fourth and final match at Centurion. De Kock finished with the top-score in the innings, remaining unbeaten on 129 off 128 balls, with Morne Morkel being the last man dismissed for a 10-ball duck. After losing a couple of quick wickets early on the second day, Quinton de Kock propelled the hosts towards a total in excess of 450 thanks to a couple of vital partnerships worth 50 and 82 runs with Kyle Abbott and Dane Piedt respectively. The England bowlers bowled better than they did on the first day, with Ben Stokes finish with the best figures among the lot by taking four wickets for 86 runs. The visitors however, were sloppy in the field as usual, dropping Quinton de Kock a couple of times to allow him to race away to his maiden three-figure score. LIVE CRICKET SCORECARD: South Africa vs England 2015-16, 4th Test at Centurion, Day 2

South Africa earlier resumed from their overnight score of 329 for the loss of five wickets, with Temba Bavuma and de Kock’s sixth-wicket partnership well in excess of 50. The duo looked in great touch, especially Bavuma who was displaying elegance in his drives off the faster deliveries. Bavuma however, turned out to be the first victim of the day when he was caught behind by Bairstow, departing for 35. LIVE CRICKET UPDATES: South Africa vs England 2015-16, 4th Test at Centurion, Day 2 ICC Under-19 Cricket World Cup 2016: Results for all practice matches 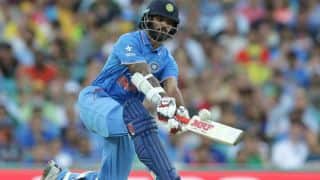