Ashwin scalped 2 wickets for 47 runs of his 9 overs in the VAP Trophy against Grand Slam.

In the recently concluded three-match Test series against Sri Lanka, Ravichandran Ashwin ended with 12 for 359 at 29.91 while Ravindra Jadeja ended the series with figures of 10 for 259 at 25.90. Since then the spin duo have been out of picture in the limited-overs. Coach Ravi Shastri had mentioned in his interview few months back that he wants Ashwin and Jadeja to focus on Test cricket, with Yuzvendra Chahal and Kuldeep Yadav bringing success to India in limited-overs cricket.

However, Jadeja and Ashwin have a bigger challenge up their sleeves the South Africa tour. Ashwin has played just one Test match in South Africa, Johannesburg in 2013. He went wicketless in that match. However, of the 4 matches that he has played against South Africa in India, Ashwin boasts of 31 wickets at 11.12. It is unlikely that India will play both their spinners in South Africa and therefore the competition stiffens. Also, India do no have a wrist spinner.

In order to bring more variations to the table against South Africa, Ashwin was seen honing his leg-spin bowling skills. Known for his off-spin, Ashwin was seen fine-tuning his skills in a VAP Trophy match against Grand Slam on Thursday. He also ended up picking to 2 wickets for 47 runs off his nine overs.

From leg-spin to off-spin to leg-spin, again?

In an interview with Wisden last year, Ashwin mentioned how he started off as a leg-spinner but was asked to discontinue with it, I can spin the leg break a mile. But when I tried it, a lot of people discouraged me saying it was very difficult. They said that I batted anyway, so why not bowl off-spin? So I started, and a lot of people were impressed.

Grand Slam might have lost the match but N Jagadeesan hailed his state (Tamil Nadu) teammate s efforts. Jagadeesan also revealed how Ashwin has working on his leg-spin for a long time now, I knew Ashwin was working on leg spin. He was discussing about it during the Ranji nets. He did bowl the odd leggie against Andhra and Mumbai. I had kept wickets for him. But his accuracy is excellent. He bowled googlies and executed the faster one with good control. As a batsman, you can t get away from him. His height is an advantage and he did generate bounce, as quoted by the Times of India (TOI). 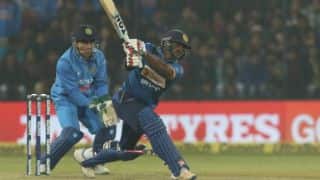