Indian off-spinner Ravichandran Ashwin has moved up by two places to fourth in the latest ICC One-day Rankings for bowlers while skipper Mahendra Singh Dhoni has dropped a place to sixth. 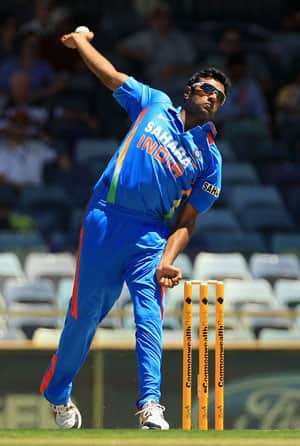 Indian off-spinner Ravichandran Ashwin has moved up by two places to fourth in the latest ICC One-day Rankings for bowlers while skipper Mahendra Singh Dhoni has dropped a place to sixth.

Ashwin is the only Indian player in the top-20 in the bowlers’ list while in the chart for the batsmen, India have two players with Virat Kohli retaining number two spot.

Meanwhile, India remained unchanged at number three position in the team list, headed by England and followed by South Africa.

India have 120 points while both England and the Proteas have 121. When ratings points are calculated to within the decimal point, South Africa trails England by a mere 0.09 ratings point.

England will hold the position until at least January 2013, when it travels to India for a five-match ODI series.

Saeed was the highest wicket-taker in the recent series against Australia. He picked 10 wickets at an economy rate of 3.41 with an average of 9.9 in the series.

Hafeez slipped to second position in the bowlers’ table but moved up a place to second in the Rankings for all-rounders with a career-best rating of 413.

South Africa paceman Dale Steyn has re-entered the top 10 in the bowlers’ table. He has moved up four places to 10th.

Steyn’s teammate Robin Peterson, who was the highest wicket-taker on either side in the series against England with seven wickets, has moved up 12 places to a career-best 29th.

Peterson’s overall rating of 575 is his career-best.

South Africa’s Hashim Amla, who was the highest run-getter on either side in the series against England with 335 runs, has consolidated his position as the number-one ranked batsman, followed by Kohli and AB de Villiers in third.

Amla’s overall rating of 901 is the highest of his career and is the eighth best in history.

Jonathan Trott in fifth (up by two) and Michael Clarke in seventh (up by one) have also made gains in the top ten of the latest batting table. Michael Hussey, meanwhile, is now tenth in the table, moving up four places.

The rankings for all-rounders is still headed by Bangladesh’s Shakib Al Hasan. (PTI)