Ravichandran Ashwin produced a career-best 12-wicket match haul as a merciless India relied on the spinners to crush New Zealand by an innings and 115 runs to take a 1-0 lead in the two-match Test series. 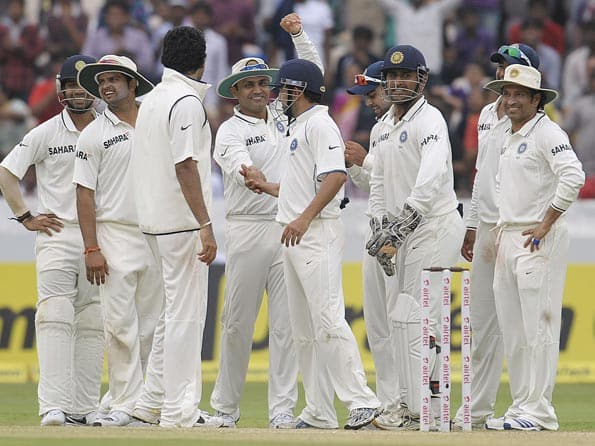 Ravichandran Ashwin produced a career-best 12-wicket match haul as a merciless India relied on the spinners to crush New Zealand by an innings and 115 runs to take a 1-0 lead in the two-match Test series.

New Zealand batting collapsed yet again as they lost the last seven wickets for 26 runs to get bundled out for a meagre 164 in the second innings, shortly after the tea break to give the hosts an easy victory with more than a day to spare.

Ashwin’s match figures of 12 for 85 is the best by an Indian in a Test match against New Zealand, eclipsing S Venkatraghavan’s 12 for 140.

The Tamil Nadu spinner foxed the inexperienced Kiwi batsmen by extracting a lot of turn and bounce from the strip as he capped 6/54 to follow up his first innings tally of 6/31.

Ojha returned with figures of three for 48 to lend a fine support at the other end as the spin duo shared nine wickets between them exposing the Black Caps’ vulnerability to play spin.

India had a frustrating first session as the overnight duo of Brendon McCullum (42) and Kane Williamson (52) put up a brave front after resuming at 44 for one, following on in the second innings.

But after Umesh Yadav (1/32) broke the 72-run second wicket partnership, New Zealand lost their remaining nine wickets in 34.4 overs with more than a day left for the match.

New Zealand were 146 for six at tea but lost the remaining four wickets in 25 minutes after resumption as the spin duo wreaked havoc in the camp.

It was also India’s first Test win in nine months following a 0-4 spanking in Australia as the batting stalwarts Rahul Dravid and VVS Laxman retired in the aftermath of the series.

The two teams will now travel to Bangalore for the second Test to begin from August 31.

After a frustrating first-half, India got their first breakthrough of the day after lunch when a poor decision by Steve Davis ruled McCullum out.

McCullum got an inside edge before the ball hit the pads but umpire Davis ruled the batsman out as the Indian fielders appealed.

Predictably, McCullum was angry as he started trudging back towards pavilion nodding his head in disbelief.

The absence of DRS certainly hurt the New Zealanders as the partnership between McCullum and Kane Williamson was proving to be a thorn in the flesh of the Indians. They had defied the Indian attack for 30.3 overs.

Once the resolute stand was broken, it was a one-way traffic for the Indian spinners who returned to haunt the inexperienced Kiwi line-up.

Ross Taylor (7) followed becoming Ashwin’s first victim of the second innings when the New Zealand skipper was foxed by the turn to see his stumps tumbling.

Flynn and Williamson looked to build on a partnership as the latter, who had scored a century in his debut in Ahmedabad two seasons ago, went on to complete a fine half century.

But soon after he too ran out of patience with Ojha adding a second to his tally when the youngster was caught in the slip by Virender Sehwag.

Ashwin took two wickets in two overs in the form of Flynn and James Franklin as with spin at both ends, it was just a matter of time for the Indians to take an unassailable 1-0 lead.

Sehwag took a diving catch at the first slip to dismiss Franklin off Ashwin’s bowling and it enthralled the 20,000-plus Sunday crowd in the 39,000-capacity stadium.

Ashwin was simply unplayble as the Indian offspinner took his 10th wicket haul in the match in the form of Van Wyk.

Earlier, India straightway began the proceedings with the spin duo of Ojha and Ashwin but there was little assistance in the morning as the Kiwi batsmen played them out sensibly.

The duo of McCullum and Williamson played with patience, waiting for the loose deliveries as India struggled to get the first breakthrough of the day.

There was a setback for India when centurion Cheteshwar Pujara while fielding at short leg in the 33rd over, was hit near his right knee, around the same place he had a surgery last year in London.

Grimacing in pain, Pujara was taken out of the field by the support staff as Ajinkya Rahane came as the replacement.

Pujara did not come back but there was an announcement that he was alright and it was just a minor “bruise”. India brought on the medium-pacers Zaheer and then Yadav at one end hoping for some reverse swing but there was no success with the Kiwi duo keeping their intact.(PTI)