Off-spinner R Ashwin impressed with a six-wicket haul as India imposed the follow-on on New Zealand after ending the visitors' first innings at 159 at the stroke of lunch on the third day of the opening cricket Test here today. 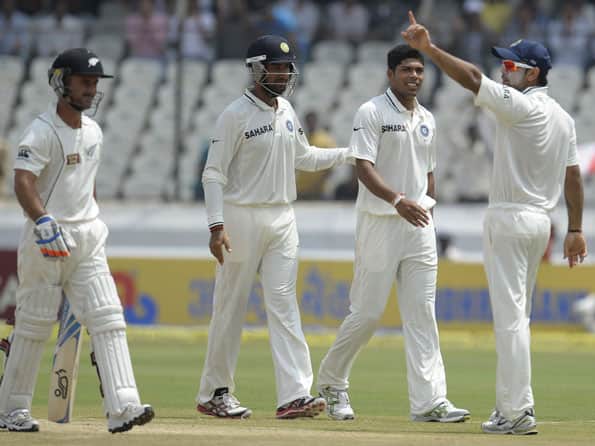 Off-spinner R Ashwin impressed with a six-wicket haul as India imposed the follow-on on New Zealand after ending the visitors’ first innings at 159 at the stroke of lunch on the third day of the opening cricket Test here today.

With more than two days left in the match, the visitors still require 279 runs to avoid an innings defeat.

The Indian spin duo of Ashwin and left-armer Pragyan Ojha shared nine wickets between them to rattle the inexperienced New Zealand line-up which could not stand up to the challenge.

India had put on 438 in their first innings with a career-best 159 by Cheteshwar Pujara.

Ashwin returned with brilliant figures of 16.3-3-31-6 to better his previous career-best of 6/47 (vs West Indies in his debut Test in Delhi, November 2011). This was also his third five-wicket haul in Test cricket.

Umesh Yadav gave India the first breakthrough in the second over of the morning when the pacer broke the overnight stand between Franklin and Kruger van Wyk after trapping the latter in front of the wicket for a nought.

The spinners then wrecked havoc as the inexperienced visitors found it very tough to negotiate the bounce and turn.

Ojha bowled a superb first spell (5-1-9-1) when he took his third wicket in the form of Doug Bracewell.

The Kiwi medium-pacer went down the track but missed the line completely for a customary stumping by Indian skipper Mahendra Singh Dhoni with New Zealand reeling at 141/7.

Ashwin was introduced in the 16th over of the day, and like yesterday, he got into the groove straightway taking a wicket in his very first over by dismissing Jeetan Patel off his third ball.

New Zealand were in real trouble at 153 for eight at that stage.

Ashwin was simply unplayable for the tailenders as the off-spinner took two wickets — Trent Boult and Chris Martin — in two successive balls to bundle out the visitors, 279 runs shy of India’s first innings total.

Earlier, bad weather once again played spoilsport as the start of the proceedings was delayed by an hour due to overnight rain, forcing a deduction of seven overs.

The weathermen, incidentally, have predicted light rain and thundershowers for next three days.

Yesterday the start was delayed by 26 minutes as the groundsmen were told to keep the covers on in anticipation of rain that never arrived.

The second and final Test of the series will be held in Bangalore from August 31-September 4. (PTI)