Rahul Dravid a great friend and a colleague: VVS Laxman

Rahul Dravid a great friend and a colleague: VVS Laxman

VVS Laxman, who has been involved in innumerable match-winning partnerships with Rahul Dravid, termed the latter as an 'all-time great during a star-studded felicitation function on Tuesday. 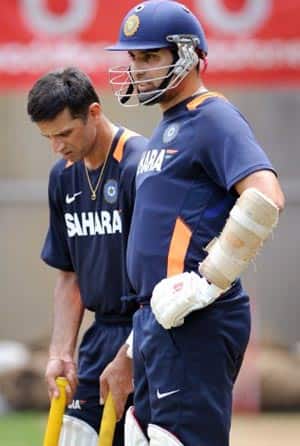 VVS Laxman, who has been involved in innumerable match-winning partnerships with Rahul Dravid, termed the latter as an ‘all-time great during a star-studded felicitation function on Tuesday.

“It is a great occasion in the presence of the legends and the Indian greats of cricket to celebrate the end of the illustrious career of one of the all-time greats of the game.

“A great friend and a colleague. I will definitely be missing you in the dressing room.

“When I first met you as a 16-year-old, playing for Karnataka Under-19, I was impressed with your passion for the game and your style. We then went on to play for India and I cherish our relationship that blossomed over the years.

“In 1996, Rahul made his debut at Lord’s where he got out after scoring 95. He must have been really disappointed not to have got his century. But he proved how much effort, hard work and pride he puts into his game when he scored his century at Lord’s in 2011. Celebrations showed how much it meant for him to score it at the Lord’s for his country.

Laxman recalled the sacrifices Dravid made in the interest of the team.

“He has always been a very selfless cricketer. And that was proved by the various roles he has donned as a cricketer over the years. Right from opening the batting to keeping, he has always showed that for him team comes first.

“All the best to Rahul as he prepares to spend the time with his lovely family. I would also like to congratulate his family for the upbringing and the way he has been. Even after achieving so much he has always remained grounded. I am sure he would contribute to Indian cricket in the future also.”

MS Dhoni spoke about how different was Dravid in terms of showing aggression.

“At a time when it is considered that aggression is verbal, he never said a word to the opposition. He showed the aggression through taking a catch or staying at the crease and channelise the discomfort and aggression in the best possible manner.

“He is one of the greatest to play the game and the greatest to play at number three. He is someone who has got most catches. He was always ready to do anything for the country and the team when it came to opening the batting, wicket keeping, or fielding at silly point or at the slips.”

“India lost in the first round in the 2007 World Cup and then there was a phase were we won 20-22 matches chasing and Rahul Bhai has been a part of both. He was someone who would walk through the obstacle.

“As a wicket keeper, he has taken some catches which many regular keeper wouldn’t have. It is a tribute from a lot of youngsters who have learned from Jam. Not to forget he could play most of the sports well, be it soccer or badminton. He is a true gentleman,”(PTI)

I lived my dream of playing for India: Rahul Dravid