India drew the five-match T20I series 2-2 against South Africa after the last game was washed out due to heavy rain at the M Chinnaswamy Stadium.

Bengaluru: India drew the five-match T20I series 2-2 against South Africa after the last game was washed out due to heavy rain at the M Chinnaswamy Stadium in Bengaluru on Sunday. Indian head coach Rahul Dravid praised his players after the series and said that he is not disappointed with anyone in the team.

Both the teams produced some remarkable performances across the four enthralling matches. The Indian cricket team failed to win the first two matches but levelled the series after winning the next two matches in dominating fashion.

Some players performed brilliantly, while the likes of Ruturaj Gaikwad, Shreyas Iyer and Rishabh Pant struggled to find form during the series. However, Rahul Dravid remarked that he will continue to give underperformers more opportunities as he is not someone who will judge people after one series.

He said, “I don’t like to judge people after one series. Everyone who got the opportunity truly deserved it. In this format, you are going to have some good and bad games. Shreyas Iyer showed a lot of intent and played positively for us, Ruturaj Gaikwad showed in one particular inning the quality and skill he has got, and in T20s, you can have the odd game where it goes up and down a little bit. So, we are not disappointed with anyone.”

Gaikwad had a bad Indian Premier League (IPL) season in 2022 and his best performance in the recent series came in the third T20I when he scored 57 in just 35 balls. Rahul Dravid praised the attacking intent of the Indian players.

“As a group, we were looking to play a positive and attacking brand of cricket. And, when you try and do that at times, it is not always going to come off. But we are certainly clear about the kind of cricket we want to play,” concluded Rahul Dravid. 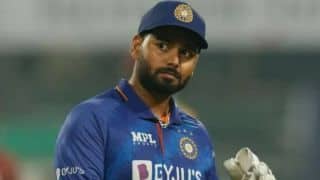