Former India international and current India A and India Under-19 coach Rahul Dravid has advocated for the inclusion of proper first-class games head of any big away series, in the wake of the discussions regarding the lack of such games owing to the tight international schedule.

Former India international and current India A and India Under-19 coach Rahul Dravid has advocated for the inclusion of proper first-class games head of any big away series, in the wake of the discussions regarding the lack of such games owing to the tight international schedule.

I think that needs to change. I benefited hugely from having proper first-class games. Maybe schedules have changed and things are more complicated, but there is no doubt that a couple of first-class games before any Test tour is only going to help, Rahul told The Week in an interview earlier this week.

He also said that he doesn t understand the concept of having all the members of the squad playing in a practice game, rather than having a proper first class 11 on 11 matches.

I found this 14 playing 14 [rotation system] started happening towards the end of my career. I did not like those games as a player, he said.

In England, India had played a similar 14 on 14 matches against Essex as their only practice match, which was reduced to three days on BCCI s insistence. Indian management drew a lot of flak for the lack of preparation time ahead of the England Test series which India conceded 1-4.

Talking about the batting in Test cricket, While Dravid said there have been improvements over the years in terms of shot-making, the aspect of batting long seems to be on the wane.

Batsmanship comprises of many things. If you were to view it from the prism of shot-making ability, innovation, power, ability to hit sixes and scoring at a quicker rate, then there is no doubt batsmanship has improved, explained Dravid, who once famously batted for 740 minutes in one innings against Pakistan in Rawalpindi,scoring 270 runs.

He went on to add: [But], if you view it from the prism of batting time, being able to get through challenging times and being able to play on tracks on which seam or spin is more, then maybe batsmanship has declined a little bit. Players now have to juggle between three formats and may not be getting to have as much red ball time and conditions.

Dravid also commented on the young crop of players that he manages in India A stating that is sometimes left surprised by the fact that some players in team don t play red-ball cricket for nearly six months, a trend he said was never the norm during his cricketing days.

There were boys who came on the A tour with us to England, who had not played red ball cricket for six-to-seven months! It would never have happened before. The time they get to practice red ball cricket has altered drastically, said Dravid. 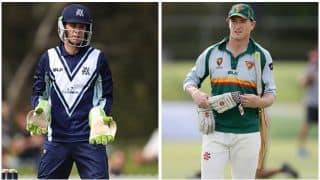