Clarke is in a fitness battle to recover from his hamstring injury.

Clarke is in a fitness battle to recover from his hamstring injury and be fit and firing for the World Cup, which gets underway from February 14 in Australia and New Zealand. He remains on track for a return to play by February 21.However, describing it as an un-Australian decision, Dravid said that without Clarke being in the squad and Australia just bringing Steven Smith into it, they don’t look a weaker side at all, News.com.au reported.

In fact, the former India n skipper added that some people might argue that Australia actually looks a better side. He is hoping that Clarke’s inclusion in the World Cup squad is not an emotional decision.Dravid claimed that they just felt that they had to take this decision, adding that it’s almost a very un- Australian decision. 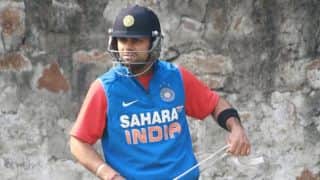