It's not very often that cricket considered to be a religion in India, and literature come together on the same platform, but when it happens it's bound to create magic and that is exactly what happened once Rahul Dravid took to the stage at the Jaipur Literature Festival. 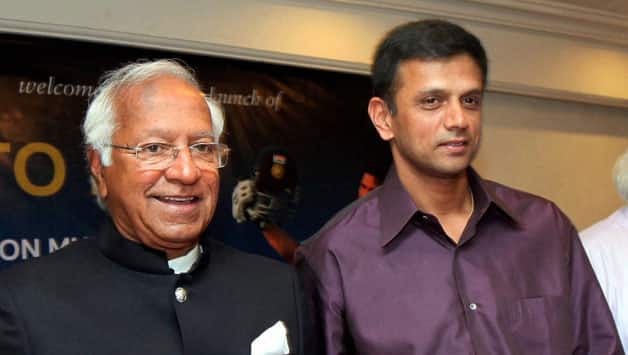 It’s not very often that cricket considered to be a religion in India, and literature come together on the same platform, but when it happens it’s bound to create magic and that is exactly what happened once Rahul Dravid took to the stage at the Jaipur Literature Festival.

The 40-year-old Dravid, one of India’s finest batsmen who scored close to 25,000 international runs before announcing his retirement early last year, said the game teaches one to be humble.

“Cricket teaches you to be humble. You fail more than you succeed in the game,” Dravid told a packed audience at the Diggi Palace here today.

Dravid was speaking in a session titled ‘Highway to Nowhere’ before which he and Sharmila Tagore, wife of the late Mansoor Ali Khan Pataudi, launched a book on the former India captain titled ‘Pataudi: Nawab of Cricket’, written by noted cricket writer Suresh Menon.

Cricketers have always remained under media glare and though the ace batsman didn’t enjoy it all the time, Dravid said he understands that it’s part and parcel of the game.

“I can’t say I always enjoyed it but it comes with the game and there are good parts about it. Youngsters need to be careful that they do not get caught up with the idea that one can become a hero instantly without a body of work to back it up,” Dravid said pointing out that “today you can become a star quickly but earlier you had to do what Gavaskar did, what Kapil Dev did.”

Dravid, who captained Rajasthan Royals in the last season of the Indian Premier League, said he has never been an IPL sceptical. “There are challenges it throws up like scheduling along with tough challenges to adapt quickly to the shorter format of the game, changes in game plan and quick solutions. It changes the environment of the dressing room as we meet players from different countries. It has been changing relationships among cricketers for the last five years and we understand them better.” When asked about the future prospects, Dravid, famously known as the ‘Wall’ of the Indian Cricket team during his playing days, declared that there was no paucity of talent in the Indian cricket. “We just saw Cheteshwar Pujara make a great start to his international career. Virat Kohli has been growing with experience and Suresh Raina‘s ODI performance has been good. Ajinkya Rahane, Rohit Sharma and Manoj Tiwary are also good players. The barrier between metropolitan and small-town cricketers has broken now as young cricketers are playing more inter-city and inter-district matches. They are visiting other states for tournaments and getting better exposure,” he said. Admitting that he has always loved reading, Dravid termed it a “stress buster”. “I read to get rid of stress because it takes my mind off other things,” he revealed. Having retired from the international cricket last year, Dravid is now enjoying spending time with his family. “I spend a lot of time at home with my family,” he signed off.