Bidding adieu to veteran Indian batsman Rahul Dravid, former Indian captain Anil Kumble said he was honoured to have played alongside him for Karnataka and India. 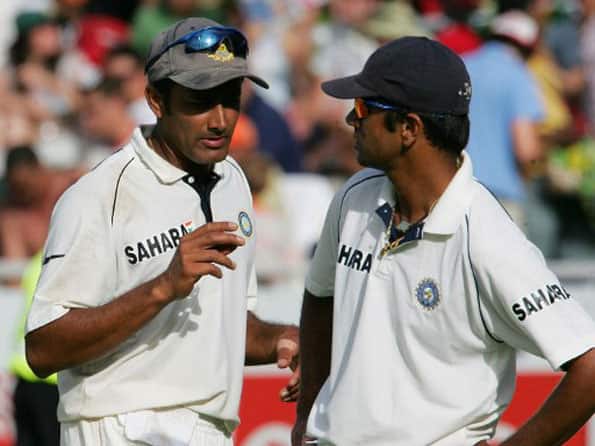 Former Indian cricketer Anil Kumble said he was fortunate to have played alongside Rahul Dravid for both, Karnataka and India AFP

Bidding adieu to veteran Indian batsman Rahul Dravid, former Indian captain Anil Kumble said he was honoured to have played alongside him for Karnataka and India.

“Let me take this opportunity to congratulate Rahul. I am really fortunate to play along side you. I’ve enjoyed every moment I’ve played with you. It’s been an honour,” said Kumble.

“You’ve been a constant friend and colleague I depended on for advice. You are an inspiration and a role model. You are among Karnataka’s finest cricketing sons,” he added. Praising Dravid for his commitment to Indian cricket, Kumble said his former team-mate had always been unassuming despite his achievements.

“Every moment I have played with him, he has been quiet, unassuming and completely consumed by his enthusiasm and passion for the game. His career saw over 10,000 runs in ODIs, over 13,000 runs in Tests and a very unique record of over 400 catches in international cricket…a fantastic record indeed.

“His reassuring presence at the crease or on the field allowed every other batsmen rare opportunities.”

“You are the perfect ambassador for cricket and an ideal team man. We shared wonderful moments together on the field and have had our share of worries as well. In all of it, you have been a constant friend and colleague that I depended on for advice.

“We expect you to be wearing an administrative coat in the KSCA. At the KSCA we plan to celebrate your career in a fitting way,” he said.

Wishing Dravid all the best for his new life after cricket, Kumble said, “Enjoy your deserved time with your family. I wish you all the best.” (PTI)