Rahul Dravid was given the honour ahead of the second Test.

Dravid made his Test debut way back in 1996 against England at this same venue. On that occasion, he had scored 95 and was unlucky to be dismissed on the verge of scoring a debut ton. Dravid then returned in 2002. In 2007, he captained India in the Test match there. And in 2011, as his teammates failed to make a mark, Dravid scored a ton in the first innings. 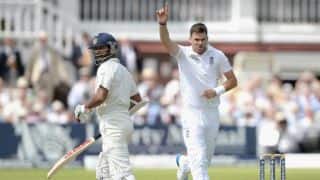