While Dravid did not speak to the waiting media, Ganguly maintained that they had a general discussion on NCA.

BCCI President Sourav Ganguly and Head of Cricket at the National Cricket Academy (BCA) Rahul Dravid met at the board’s headquarters in Mumbai on Thursday. The duo discussed matters related to the NCA and injury management of Indian cricketers.

The meeting comes days after the NCA had refused to conduct fitness test of pace spearhead Jasprit Bumrah, who is returning from a back injury. While Dravid did not speak to the waiting media, Ganguly maintained that they had a general discussion on NCA.

Dravid entered the BCCI HQ around 12 noon and left only around 5 in the evening.

Meanwhile, on the Cricket Advisory Committee, the BCCI chief did not disclose anything. However, a source said the Apex Council had informally asked Sourav to speak to senior cricketers about the CAC since he shares a good rapport with players.

The source, however, refused to give any time frame about when the CAC, which is supposed to pick new selectors, would be formed. It is reliably learnt that the final call on CAC would be taken by Ganguly himself.

In other report, cricketers from India and Pakistan are unlikely to feature together in the combined Asian XI team that will take on World XI in the two official T20 matches in Bangladesh. BCCI joint secretary Jayesh George confirmed on Thursday.

The matches are scheduled to be held in March next year a part of celebrations to commemorate the birth centenary of Bangabandhu Sheikh Mujibur Rahaman, Bangladesh’s father of nation.

The BCCI, though, will release five of its players for the two official games.

“There were some discussions in this regard during the Pink Ball Test in Kolkata. It looks unlikely that India and Pakistan players will feature in the same Asian XI team. It will depend on Sourav as he will have discussions with the Bangladesh Cricket Board,” George was quoted by PTI on the day.

The T20 matches will be held on March 18 and 21 in Dhaka, a time when South Africa will be in India for an ODI series, the third match of which is clashing with the first Asia XI match. 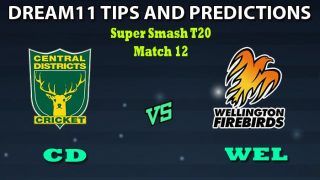