Samit has been amassing runs by the hundreds at U-14 level. Two years ago Samit had accumulated 125 for Bangalore United Cricket Club, which Rahul used to serve as President. His innings was laced with 12 boundaries. It does not stop there. Samit was adjudged Best Batsman during U-12 Gopalan Cricket Challenge in September 2015. He had scored 77*, 93, and 77 in consecutive innings. 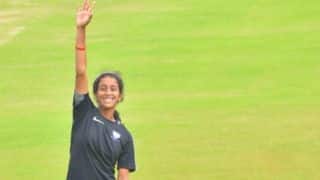