New Delhi: Suspense over a role for former captain Rahul Dravid in the BCCI continued with Board Secretary Anurag Thakur saying that his services would be sought at an appropriate time. READ: Sourav Ganguly not sure about his role in BCCI advisory committee

“For any cricketer of that stature, BCCI would like to have their services. When the time comes, an announcement will be made. Not everybody can be on the same panel,” Thakur told ‘Times Now’ explaining Dravid’s absence from the newly-constituted BCCI cricket advisory panel. The panel comprises former greats Sachin Tendulkar, Sourav Ganguly and VVS Laxman. READ: Sachin Tendulkar, Sourav Ganguly and VVS Laxman join BCCI advisory committee

“For the betterment of cricket, we will need their advice, they were part of the golden generation,” Thakur said. The committee has been mandated to guide the Board and the national team on various “progressive steps” needed for future challenges. READ: BCCI advisory panel consisting Sachin Tendulkar, Sourav Ganguly, VVS Laxman to meet in Kolkata ahead of Bangladesh tour

The BCCI said the three legends’ guidance will be sought in preparing the national team for gruelling overseas assignments besides strengthening the domestic structure. Their inputs will also be taken while appointing the new coach to replace Duncan Fletcher, whose tenure has ended. 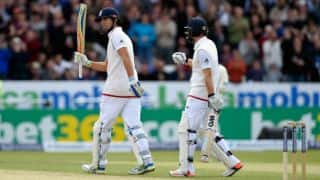