The batting legend showed his human side after Rajasthan's astonishing exit.

It isn’t often that Rahul Dravid loses his cool, but such was the manner of Rajasthan Royals’ defeat that he threw his cap on the ground in an uncharacteristic manner. Mumbai Indians needed to chase down 190 in 14.3 overs and the scores were then tied. To surpass Rajasthan’s net run-rate and move into the Indian Premier League (IPL) 2014 playoffs, Mumbai needed a boundary off that one ball.  Aditya Tare pulled off the unthinkable and smashed it over square-leg for a six.

What must have irked Dravid was the way the last few balls were bowled. With eight needed off two balls, Ambati Rayudu received a low full toss and he smashed a six over square-leg. And then, the same ball was repeated when all Faulkner had to do was avoid a boundary.

Dravid is often considered an epitome of calm. He is a gentleman cricketer who upholds the values. But the fact that this got to him shows his passion. There was another occasion when Dravid had lost his temper in the dressing room. Dravid’s wife Vijeeta had written in her article for Cricinfo back in 2012  that once Dravid confessed that he had lost his cool and had regretted. It was only much later that she found out that Dravid had thrown a chair in anger after England had beaten India at Mumbai in 2006. She explained that it was because his team had lost badly.

Though Dravid is a great sportsman, he will have his moments where he is human. This is another instance and one will overlook that as Rajasthan did indeed lose badly. It was their game to lose and putting Mumbai under all that pressure did not work as they let the advantage slip. 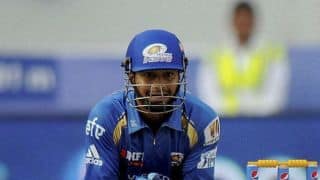