Shoaib Akhtar is the only fast bowler to have remained unbeaten in consecutive ODI innings.

Karachi: Former Pakistani pacer Shoaib Akhtar branded Indian legend Rahul Dravid as his biggest ‘nightmare’ saying that the 42-year-old was the first batsman who could intimidate him. Speedster Akhtar compared Dravid with former American boxer Muhammad Ali, saying that he could tire a bowler physically and kill him mentally, the Dawn reported. Akhtar felt that only former Pakistan skipper Wasim Akram had the ability to taken on ‘the wall’. The Rawalpindi Express also lauded the ‘master’ Sachin Tendulkar as a great batsman, and added that he was the one who made Akhtar a star, for which he was grateful. READ: Shoaib Akhtar settles rift with PCB after they return Rs. 7 million to him

40-year-old Akhtar made his first Test debut in 1997. The player made headlines in year 1999, when he dismissed Dravid and Sachin Tendulkar off consecutive deliveries in the first match of the Asian Test Championship at Kolkata. Akhtar, who was the first bowler in the history of cricket to bowl over 100 mph, also holds the World record for remaining not out in 12 successive innings in One-Day Internationals (ODI).

Recently, Pakistan Cricket Board (PCB) has returned an amount of seven million rupees to  Akhtar which it had deducted from the former fast bowler’s earnings as part of a fine imposed on him years ago. An official of the board said that during a meeting between Chairman of the executive committee, Najam Sethi and Akhtar, the matter was amicably resolved. Some other top officials of the board were present in the meeting at the Gaddafi stadium. “The matter is now closed and Shoaib Akhtar returned happy with the outcome,” he said. READ: Shoaib Akhtar’s father passes away #ChangeCricket: The ball gets rolling at The Oval Test in Ashes 2015 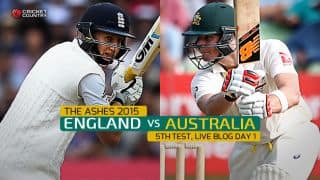