Rahul Dravid was unveiled as the new mentor for Delhi Daredevils for IPL 2016.

New Delhi: Indian batting great Rahul Dravid on Tuesday exhorted youngsters to aspire playing all three formats of the game and not just focus on Twenty20 cricket. When asked about the emerging trend of T20 specialists like Pawan Negi being picked for the Indian team, Dravid said the upcoming talent must focus on playing all formats. “There are many examples of players who are equally successful in all formants including Test cricket. We tend to focus on T20 specialists but we also tend to forget that there are guys like Virat Kohli, [Shikhar] Dhawan and MS Dhoni, Ajinkya Rahane, who has had an incredible year. So there are good enough examples in the same team of players who have done well in all three formats,” Dravid said. READ: Rahul Dravid announced as Delhi Daredevils mentor for IPL 2016

“So my advice to youngsters is to aspire to play all three formats of the game. Why sell yourself short? Why play only one format, why not aspire to play in all three? ” Giving the example of a tournament like IPL, Dravid said only performance matters whether it comes through an icon player or a youngster.

“I don t like to rate people as icons. Obviously there are some players who are more experienced, who have achieved more. None becomes an icon like that, you have got to earn it. In a short tournament like IPL, it is all about performance. You see a lot of top players performing and at the same time, you have the youngsters performing. It is a question of finding that balance of youth and experience,” he said. READ: Sachin Tendulkar, Rahul Dravid examples for children aspiring for cricket career: Kapil Dev

Did he expect Negi to be bought at a whopping Rs 8.5 crore at IPL auction last month? “I think the first thing is that auction can be very dynamic. I don’t think you should judge a player by the price he was bought for at the auction. I don’t like to judge people by the price they were bought at. Pawan is an exciting young talent. He has shown that with CSK. He is a handy lower-order batsman along with his left arm spin. That is what the selectors have seen and picked him in the Indian team for. We hope he will produce same performances for Delhi [Daredevils],” said Dravid. 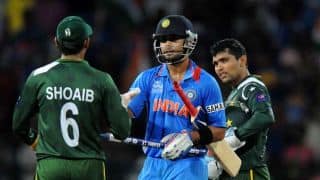