Mumbai chief selector Ajit Agarkar has credited Rahul Dravid‘s feedback as the primary catalyst for Prithvi Shaw‘s selection into the Mumbai squad for the Ranji Trophy semi-final against Tamil Nadu in 2016-17. In a conversation with Sportstar, Agarkar said that the then chief selector of Mumbai, Milind Rege was not convinced about drafting in the teenager into the squad but India U-19 and A team coach, Dravid’s consultation served to clear all doubts regarding the youngster as he had seen and mentored him in that role.

Even in the current scenario, when opening batsman and the India U-19 World Cup winning captain Shaw has been drafted midway through the Test series between India and England, MSK Prasad is also understood to have consulted Dravid for a suitable replacement of the out of form opener Murali Vijay.

Agarkar said, If Rahul has given them the feedback, which I assume they would have sought, that’s all you would want to know. He is not going to promote him for his promise or age.

Agarkar feels Shaw has got a golden opportunity to team up with the big boys so early in his career. Even if he doesn’t get a game, just to be around the group and a happy change room will work wonders for him. I am sure this exposure will make him an even better batsman, he said.

Shaw is just a teenager but his precocious talent has forced many to take notice of his game first in the maidans dotted around Mumbai and then on the national scene. He used to travel all the way from the suburbs in north-western Mumbai to the southern parts through long train journeys and has cherished the dream to play cricket for India since he started playing cricket.

Shaw has made 1418 runs in 26 first-class games with seven hundreds and five fifties. His highest score is 188 which he made in an unofficial Test against West Indies A played at Beckenham, England. This innings forced the followers of the game to start taking him more seriously than they already did and as the Indian openers failed in the first two tests against England in the Pataudi Trophy, talks for his and some other solid batsmen into the national team also started doing the rounds in cricketing circles.

He leaves for England on Thursday from Bengaluru and would look to learn a lot from interacting with the seniors in the team and make a solid contribution, once given an opportunity at the highest level. 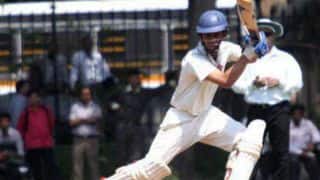