KL Rahul is fighting fit as he gears up for the unofficial two-match 'Test' series against Australia 'A'.

Chennai: Talented Karnataka opener KL Rahul missed out on the one-off Test tour of Bangladesh due to dengue but now is fighting fit as he gears up for the unofficial two-match ‘Test’ series against Australia ‘A’ starting here on July 22. “It was very disappointing to miss out on a Test match (vs Bangladesh) especially when you have just started playing Test cricket. Things like these happen. Now I am looking forward to playing these matches. Last time, I played day’s cricket was Ranji Trophy. This will be an ideal opportunity as conditions here will test my fitness,” Rahul said. “I have worked at the NCA with the trainers and this will be an ideal opportunity,” said Rahul, who scored his maiden Test century against Australia in Sydney earlier this year, at an ‘Open Session’ here today.

The 23-year-old Rahul said that India ‘A’ is a platform that builds character which goes a long way to help players prepare for the tougher battles like Test cricket. “It (India A) is a big platform for young players. When we toured Australia for India ‘A’ in mid-June last year, I had a fair idea of pressure as we were playing the best XI from different country. It is completely different pressure from playing Ranji Trophy. “These A tours builds character of a player and makes it easy for him in international cricket,” said Rahul, who has scored 3068 first-class runs in 34 matches at an impressive average of 56.81. Read: KL Rahul feels competition for opening slot good for India

For a classical top-order batsman, the difference between first-class and international cricket is more about the “mental aspect” than anything else.”Quite honestly, cricket is same at all levels. It’s a game of bat and ball. At the highest level, you are playing the best from an opposing country, so the margin of error is very little. The gap between first-class and international is mostly on the mental aspect. It’s about the pressures of things you go through emotionally and mentally because physically, I don’t see any difference,” he said. Read: KL Rahul: One for the future

However, this mental aspect is the area where coach Rahul Dravid‘s presence makes a lot of a difference, feels his junior namesake. “I have always felt that there is no substitute of experience. As youngsters, we can train as much as we want from 6 to 10 hours but if we don’t know what kind of pressure is there in middle, then there is no point of training hard. He (Dravid) is going to share his experiences, guide us in right ways. We hardly get chance to talk to international players who have been through the grind and Dravid’s presence gives us that opportunity,” said Rahul. 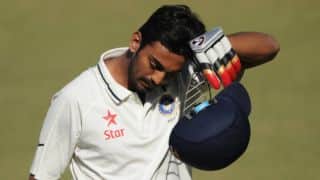