The BCCI will have a heavy five-member contingent at the ICC Meeting in Dubai starting February 2, with Rahul Johri and MV Sridhar to assist Vikram Limaye.

New Delhi: The BCCI will have a heavy five-member contingent at the ICC Meeting in Dubai starting February 2, with CEO Rahul Johri and GM (Cricket Operations) MV Sridhar to assist Committee of Administrators (COA) member Vikram Limaye. While Amitabh Chaudhary and Aniruddh Chaudhary along with Limaye has been appointed by the Supreme Court, it is Johri and Sridhar who possess in-depth knowledge about BCCI’s position in commercial matters. “Rahul and Sridhar are two people who are abreast with the happenings in ICC board meet. They will not attend but will certainly help Mr Limaye with his homework as a lot of commercial aspects are set to be decided,” a source told PTI on Tuesday. FULL CRICKET SCORECARD: India vs England, 3rd T20I at Bengaluru

Earlier, hailing the Supreme Court s move to appoint a four-member team of administrators to run the affairs of the BCCI, veteran cricket administrator IS Bindra on Tuesday said that renowned banker Vikram Limaye should take the lead in representing the Cricket Board in the upcoming ICC meeting on February 4. Now, as we herald a new future for the game, we need to learn from our mistakes. We need to have zero tolerance for selfish and vested interests. This is why I am suggesting that Vikram Limaye should take the lead in representing BCCI in the upcoming meeting of the board of directors of ICC on February 4, the former BCCI chief wrote in his blog.

I must admit I spent more than a few sleepless nights over the past week awaiting the appointment of the BCCI s four new administrators. But, Monday s Supreme Court announcement was both reassuring and a huge relief. All the four appointees former Comptroller and Auditor General, Vinod Rai, noted historian Ramachandran Guha, former women s Test captain, Diana Edulji and Vikram Limaye, CEO of the Infrastructure Development Finance Corporation are people of impeccable integrity, said Bindra. 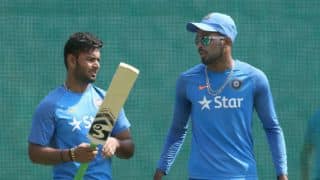 Hardik Pandya to captain India A against Australia