Rain halted second session's play between Australia and Sri Lanka on the final day of the first Test at Hobart on Tuesday. 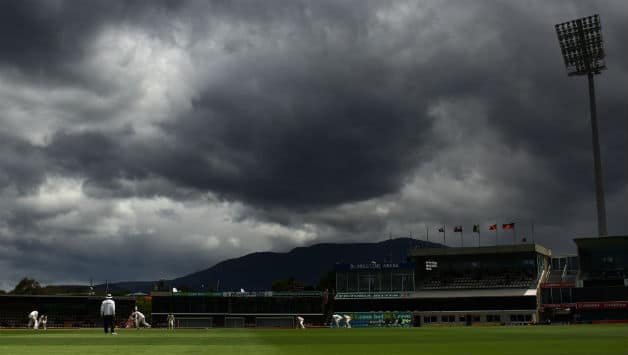 Rain halted second session’s play between Australia and Sri Lanka on the final day of the first Test at Hobart on Tuesday.

Earlier at lunch, Australia made an important breakthrough with the wicket of captain Mahela Jayawardene as they pushed for victory over Sri Lanka in the first Test in Hobart on Tuesday.

The Australians set out on the final day needing eight wickets to go one up in the three-Test series while the Sri Lankans required the more improbable 328 runs to beat the home side on a wearing Bellerive pitch.

Jayawardene’s partnership with ICC cricketer of the year Kumar Sangakkara was key for the tourists to bat out the final day for a draw, but his dismissal tilted the odds Australia’s way.

At lunch, Sri Lanka were 144 for three and still needing a further 249 runs for victory with Sangakkara on 58 off 206 balls and Thilan Samaraweera not out on 17.