Sreenath Aravind was the difference between Rajasthan getting to a near-impregnable score and finally ending up on a below-par 146 for six in their 20 overs, as he wrecked the Royals in the middle of the innings. 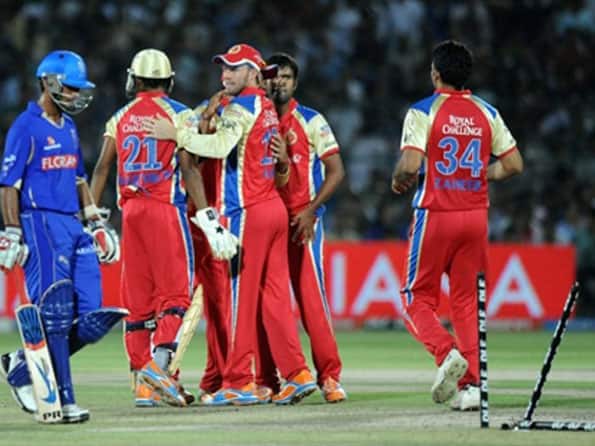 Sreenath Aravind was the difference between Rajasthan getting to a near-impregnable score and finally ending up on a below-par 146 for six in their 20 overs, as he wrecked the Royals in the middle of the innings.

Aravind went for 34 in his four over spell, but the three wickets that he got would have more than compensated for those conceded runs. Especially given the situation in which they were got.

In only the game before the previous one, the Rajasthan Royals had see their openers, Rahul Dravid and Shane Watson, get off to a very strong start before frittering it away to the Super Kings slow bowlers.

The openers had added 86 in the first 10 overs but in the remaining half of the innings, the Royals added only 61 thanks to the partnership being broken. That made the difference and the Royals went down to their opponents.

The story repeated itself tonight, when after an opening stand of 73 between the same personnel, they lost their way with the fall of both the men in the same over.

Ajinkya Rahane seemed to be continuing with his good form as he creamed Virat Kohli through the covers and then launched Abrar Kazi for a six. However, much to his chagrin, a misunderstanding with Johan Botha required him to sacrifice his wicket.

Unfortunately, Botha did not bat long enough after that and when Ross Taylor fell to his favourite slog-sweep, the Royals fans would have had a sense of d j -vu from that Chennai game.

Despite the one over from Chris Gayle in which he conceded 11, the last ten overs cost 72 and Rajasthan fell behind the eight-ball.

Earlier, Watson and Dravid had begun well with Sreenath Aravind been carted away for a couple of boundaries before Dravid carved out a couple of classic ones off Zaheer. One was timed through the point area, the other was flicked gracefully through mid-wicket.

Dravid did miss out on a free hit off Charl Langeveldt but Watson smashed one off the same bowler over long-on for a six in the last over of the field-restriction overs. Rajasthan were 43 without loss in six overs.

Watson hadn t had a great IPL before this game but looked like he was slowly getting his groove. Aravind bore the brunt when the Australian lofted a near-six and followed it up with a bigger one that crossed the line on the full.

Unfortunately for the Royals, the openers managed to get to their respective 30s only before falling to Aravind in the same, ninth over. Watson was deceived by one that was slower and the attempted-hit over the fence went awry because of the lack of timing. Dravid fell a couple of balls later to a flick back to the bowler and that signalled the start of another poor second half.

Pankaj Singh replaced Amit Singh in the Rajasthan line-up while there were changes for the Royal Challengerz Bangalore. Daniel Vettori had hurt his knee during practice and was replaced by Charl Langeveldt, Cheteshwar Pujara s knee injury in the previous game saw Arun Karthik coming in and keeping the wickets as well and Kazi joined the side too.