Defending champions Chennai Super Kings restricted Rajastan Royals to 147 for six after the visitors at one stage had threatened to pile up a huge total. 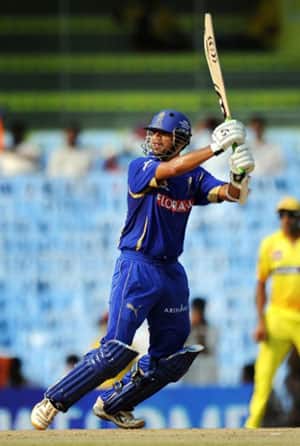 Defending champions Chennai Super Kings restricted Rajastan Royals to 147 for six after the visitors at one stage had threatened to pile up a huge total.

On a slow track that the Royals captain Shane Warne said would get even slower, the Royals frittered away a promising opening stand of 81. The visitors could score only 66 in the back 10 losing six wickets in the process.

While the home side fielded an unchanged line-up, Rajastan inducted left-arm spinner Nayan Doshi in place of medium pacer Amit Singh, making it four spinners in their ranks.

The Royals rode on a fluent knock from Rahul Dravid who made 66 off 51 balls studded with 10 fours before holing out to deep midwicket off Suraj Randiv trying to up the ante.

It says much about the calibre of RR’s batting performance that after Dravid’s 66, the other significant contributor was Shane Watson, who made 32 off 26 balls including five fours.

Watson was an ideal foil for Dravid, but none of the other batsmen crossed 20. CSK coach Stephen Fleming had said before the Royals match that though his side are unbeaten at home, each of those matches was a scrap, and this was no exception.

Outclassed in the first ten overs, CSK bounced back in the second half of the match, refusing to let their heads drop and bowling a probing length. It earned dividends, as most of the Royals players threw their wickets away after the opening stand of 81 had been broken.

The pick of CSK’s bowlers were Shadab Jakati and Albie Morkel, who claimed two wickets each.

The Royals’ disintegration started when Watson was dismissed to a stunner of a catch by Shadab Jakati who plucked out a drive over long on that was sailing over his head.

After a sober start, in which Dravid and Watson collected only 22 runs in the first four overs, the openers shifted gears with 14 runs coming in the fifth over and the team’s fifty coming up in only 6.4 overs.

In his 10 boundaries, there were a bunch of back-foot punches over midwicket, three fours off Suraj Randiv in a single over that even included a reverse sweep, and a cut over point of a short, rising ball from Morkel. Dravid, who has often been guilty of failing to convert starts this season, played positively and looked at ease right from the start. His knock was a mixture of some delectable boundaries. He hit three more boundaries off Ashwin and Jakati before bringing up his fifty in 37 balls.

Former India U-19 captaib Ashok Menaria, who followed Watson, was dismissed shortly after when he impatiently tried to hit Ashwin over long on.

South African all-rounder Johan Botha who is having a good tournament, followed shortly after, caught off a leading edge by Suresh Raina for 8.

After Ross Taylor and Ajinkya Rahane had shown signs of leading a fightback, both fell off successive balls in the 19th over to Morkel. A fifth successive win at home would see Dhoni’s men, currently fourth, enter the top three positions.

Preview: Battle of wooden spoon as Delhi take on Deccan