Winless Rajasthan take on table-toppers Chennai in Match 12 of the 2019 Indian T20 League.

It s still early days in the Indian T20 League but Rajasthan find themselves at the bottom of the pile with two consecutive defeats. Their next opponents, Chennai are contrastingly placed at the top of the points-table, having won both their games of the season so far. Besides the contrasting fortunes of these two teams, another important factor remains the pitch, which attracted controversy due to its slowness. (READ: Winless Bangalore set for daunting Hyderabad test)

Rajasthan, despite being unable to get off the mark in the standings, have witnessed some wonderful individual performances. Jos Buttler set the tone in their opening game with a sparkling half-century, while Sanju Samson lit up the Rajiv Gandhi International stadium with this year s maiden century, alongside Ajinkya Rahane. The contest has been billed as Chennai s bowlers against Rajasthan s batsmen. (READ: Samson ton in vain as Hyderabad win high-scoring contest)

Rajasthan boast a formidable batting line-up with the likes of Buttler, Rahane, Steve, Smith, Ben Stokes and Samson in their ranks. However, the batting hasn t lived-up to its reputation so far. Meanwhile, for Chennai, spinners Harbhajan Singh and Imran Tahir have been among the wickets, along with medium-pacer Deepak Chahar who struck early in both matches.

For Chennai, this would be a wonderful opportunity to test their batsmen. In the opening game, they chased down a target of 71 runs whereas their middle order was slightly tested against Delhi. At home, Chennai look better placed of the two sides to take the match, but a lot will depend on the pitch. In the first game of the season, the deck came under fire with both MS Dhoni and Virat Kohli not in favour of “such playing conditions.”

What: Match 12, Chennai vs Rajasthan

Weather: Clear skies with high humidity and the temperature touching 34

Two wins out of two matches, you cannot really ask for anything further. Not known for tinkering needlessly, whether Chennai opt for a fourth overseas players, likely Faf du Plessis, is a question on everyone s mind. If Chennai opt to include him in the XI, it is most probably going to be at the expense of a fast bowler, likely Shardul Thakur.

Rajasthan have all the reasons to alter their combination. And based on what transpired Sunday night, the changes should take place in bowling. Jofra Archer and Krishnappa Gowtham returned expensive figures and one of them should be benches to slot in allrounder Mahipal Lomror. 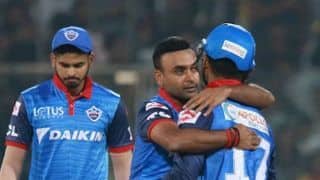