Rajasthan had earlier bundled Bangalore out for 70.

With two early wickets giving Bangalore something to cheer about in the early overs, Mitchell Starc made further inroads with Karun Nair going for an expansive drive and edging to the wicketkeeper. But, that isn’t going to be enough for Royal Challengers Bangalore as  Rajasthan Royals are on course to an easy victory in their Indian Premier League (IPL), 2014 clash at the Sheikh Zayed Stadium, Abu Dhabi.

Earlier, Shane Watson had won the toss and had elected to bowl first. His bowlers responded in fine style as they bundled Bangalore out for 70. Pravin Tambe was the star with his four wickets. This target was never going to challenge Rajasthan any day and Ajinkya Rahane set the tone with a breezy 23 upfront. There was a change in opening combination as Karun Nair walked out to open the batting with Rahane. Abhishek Nayar walked in at No 4 and is still out there with Watson.

In nine overs, Rajasthan are 46 for three and are within sight of victory. 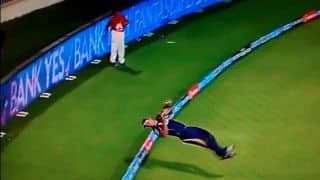