Glenn Maxwell kept Punjab in the chase with the score on 39 for two of six overs.

In the seventh match of the Indian Premier League (IPL) 7, the two early wickets didn’t deter Glenn Maxwell from going after the bowling with some lusty blows that keeps Punjab in the chase.

After two early breakthroughs in the first three overs that rocked the Punjab boat, Dhawal Kulkarni continued to bowl and the fourteenth over was a drama-filled one. Cheteshwar Pujara smashed a glorious cut shot that went for a boundary and a regulation edge that went to the keeper was not appealed by the fielders. the next over by Kane Richardson produced further drama. Glenn Maxwell skied one in the air and a simple catch was dropped by Pravin Tambe and the belligerent Australian made Rajasthan pay by smashing a four and a six of the next few deliveries.

Maxwell rubbed salt into Tambe’s wounds by slamming a huge six over deep mid-wicket. Maxwell tried for the same result in the following deliveries but looked ever so dangerous at the crease.

Earlier, Punjab won the toss and elected to field in match seven of IPL 2014. Punjab have brought in Murali Kartik in place of all-rounder Rishi Dhawan and Australian batsman Steven Smith comes his place of his veteran compatriot Brad Hodge, who misses this game due to a sickness. 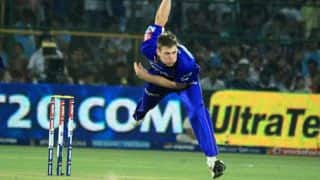 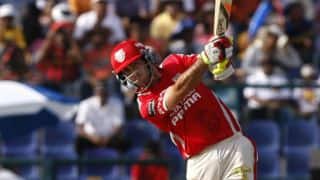