Follow the live cricket score of the RR vs RCB match.

The Royal Challengers Bangalore (RCB) have travelled to Ahmedabad to take on the in-form Rajasthan Royals (RR) in their Indian Premier League (IPL) 2015 encounter. RR may not be playing in Jaipur this year but have made Ahmedabad their territory. So far, they have lost only one match at this venue, that too in a Super Over. This will be a big test for RCB. Live Updates: Rajasthan Royals vs Royal Challengers Bangalore, IPL 2015

The thing about RCB is that they have not produced the goods this year. A look at the side would tell you that they have all the players to go all the way, but they have struggled a lot this year. Apart from the first victory, they have struggled. Perhaps, their struggles were symbolised by Chris Gayle’s 24-ball 10 against Mumbai Indians (MI). That innings was a real nightmare for the West Indian. Live Scorecard: Rajasthan Royals vs Royal Challengers Bangalore, IPL 2015

On the other hand, RR have a contrasting approach. They only have a couple of big stars and they believe in nurturing youngsters and bringing the best out of lesser nown stars. One can say that they play good efficient cricket and the best part about them is that they do not need individuals, but they click as a team, which brings about more consistency. Shahid Afridi signals for a review in the Bangladesh vs Pakistan 2015, one-off T20 at Dhaka 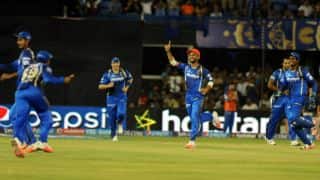