Rajasthan Royals will look to consolidate on their position on the IPL 2015 table.

Hyderabad won by 7 runs
Man of the Match: Eoin Morgan

Languishing at the second last spot in the Indian Premier League (IPL) 2015 Points Table, the Sunrisers Hyderabad face an uphill task to get better of the second-placed Rajasthan Royals  in the 41st match of the ongoing tournament at the Brabourne Stadium in Mumbai. IPL 2015: Roajasthan Royals’ Ajinkya Rahane visits Siddhivinayak temple in Mumbai

The match will be a home game for the Rajasthan Royals, who recovered from a slump to thrash the Delhi Daredevils by 14 runs in their last match at the same venue and will be aiming to maintain their winning momentum. Rajasthan are at the second spot in the IPL 2015 Points Table with 14 points and their Net Run Rate being +0.141, and they will be aiming to maintain their good show.

The tournament is entering a crucial stage where every loss could cost dearly to the teams who have been scratchy in this IPL 8, and the Rajasthan Royals will be wary of the firepower that Sunrisers Hyderabad have in their ranks. Even though Sunrisers have not played to their potential, the Rajasthan Royals cannot take their opponents’ form for granted in a format where unpredictability matters a lot. Rajasthan Royals have the best uncapped Indian talents in IPL 2015

Ajinkya Rahane has been Rajasthan’s top performer with the bat as he is the current holder of the Orange Cap, having scored 430 runs in just nine innings. The others such as Shane Watson, Karun Nair, Steven Smith and Sanju Samson have been in form too. The presence of big hitters such as Deepak Hooda and James Faulkner in the lower-order makes Rajasthan a very strong side.

Tim Southee, James Faulkner and Praveen Tambe have been the frontmen of Rajasthan’s bowling attack, but there are concerns for Rajasthan in this department. They have been the worst when it comes to bowling in the last five overs, and this is one issue which Rajasthan will have to address as they look almost certain to go into the IPL 2015 knockout stage. IPL 2015: Rajasthan Royals lucky to have Ajinkya Rahane, says James Faulkner

On paper, the differences between the two teams may not be evident when they are compared, but the fact that Rajasthan Royals have carried their habit of playing as a unit gives them the upper hand over Sunrisers Hyderabad, who have been poor this season.

Barring David Warner, there is no batsman in the SRH line-up that has been good enough to match their skipper, who has scored about 48 per cent of the runs that they have scored in IPL 2015. Warner seems to be the only danger for the Rajasthan with the bat, as he is sitting pretty at second spot in the list of most run-scorers in this IPL.  IPL 2015: Warner blames early loss of wickets for SRH’s 35-run loss to KKR

Sunrisers have an excellent bowling attack, as the presence of Dale Steyn and Trent Boult makes them a very dangerous side.  Sunrisers Hyderabad have struggled on all fronts, and the poor form of Steyn has hurt them big time. Even in their last clash, Steyn was played ahead of Boult and he ended up leaking 37 runs from his four overs without any wicket.

Shikhar Dhawan has disappointed with the bat and the poor run of their overseas batsmen such as Eoin Morgan and Ravi Bopara too has been hurting. The Indian players such as Naman Ojha and others have not been able to make a mark so far in SRH’s campaign, who have lost five out of nine matches and won four so far in IPL 8. Why IPL 2015 is virtually over for KXIP, DD, SRH and MI

Sunrisers will have to get in the mindset of ‘do-or-die’ because there are not many matches left, and there is a very tough competition between four-five teams in this IPL to occupy the berths in the top-four. Rajasthan, on the other hand, will have to guard against complacency and try and get into the mood they were in the beginning of the tournament to arrest their problems. 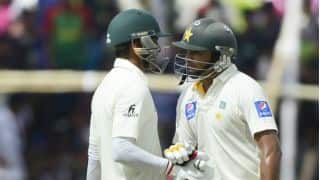 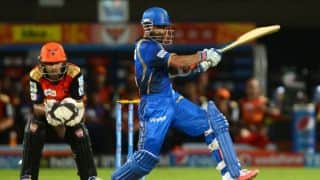