Rajasthan Royals have slammed the decision to change the pitch for their remaining home matches in the Indian Premier League with skipper Shane Warne calling it "ridiculous". Rajasthan lost by 63 runs to Chennai Super Kings last night, playing on the new surface and Warne was livid with the change. 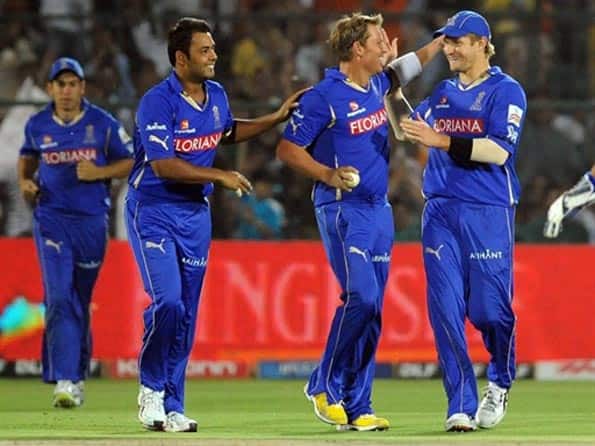 Jaipur is famous as a ‘fortress’ for Rajasthan Royals. AFP

Rajasthan Royals have slammed the decision to change the pitch for their remaining home matches in the Indian Premier League with skipper Shane Warne calling it “ridiculous”. Rajasthan lost by 63 runs to Chennai Super Kings last night, playing on the new surface and Warne was livid with the change.

“In the past four years we have never been told to play on any particular wicket. It is ridiculous to have instructions for pitch,” Warne fumed.

Asked if these instructions meant losing the home advantage to some extent, Warne retorted, “I have no idea from where the instructions came. But never before there have been such things going on. It is right of every team to extract best out of home conditions. The wickets for earlier matches were fantastic. If you had been watching earlier matches here you can make out easily that this wicket was different. It has come as a shock and surprise that we were being instructed to play on certain kind of wicket.”

Though he did not blame anybody in particular, Warne was indirectly referring to the unofficial complaint that was lodged by Mumbai Indians after they were restricted to 94 for eight on a slow track. The matter prompted pitch inspector Venkat Sundaram to rush to Jaipur and allegedly order new strips for the remaining matches here.

“I don’t want that there headings tomorrow that Shane Warne blames the pitch because it was same for both teams and I concede that we were outplayed. We were up against a side which was pumped and eager to win.”

Asked about the so-called instructions for the pitch, CSK coach Stephen Fleming said he had no idea about it. “Perhaps it is matter of the IPL level and all I can say is that we played on the pitch which was offered to us. But we are happy with the way we played. It would give us more strength in the crunch games ahead,” Fleming said.

Earlier, former IPL Commissioner Lalit Modi had taken potshots at the BCCI officials for changing the pitch for the IPL match between Rajasthan Royals and Chennai Super Kings in Jaipur.

“A little birdie just whispered that the big game in Jaipur has been moved to a side wicket on the Square. Why? ask Rca official and CSK …,” Modi wrote on his Twitter page. “Shows clearly how small things like a pitch selection can affect a game can be used by the powers that be. And it goes unnoticed,” Modi wrote.

Srinivasan, the Cricket Board President-Elect, is also the owner of Chennai Super Kings IPL side. To Warne’s tweet Modi replied, “good luck mate. I am sorry for the pitch fiasco u need to put up with. I am sure u will find a way out of this too.”

But RCB owner Vijay Mallya seems to be happy with the change. “Great to see an “even” Jaipur pitch. Well done RCA. Fair competition is the spine of the IPL’s future,” he tweeted.

Rajasthan Cricket Association curator Taposh Chatterjee said the new pitch is pretty normal and there are no demons in it. “After the Mumbai Indians and the comments made by Sachin Tendulkar the pitch inspector had rushed to Jaipur. He opined that since the old pitches had suffered wear and tear after being in use for quite some time new strips should be prepared for both the remaining home matches. We had prepared the strips in normal manner,” Chatterjee said.