The ICC approved of a new financial model after its five-day meet in Dubai on Thursday, under which the BCCI will receive 293 million dollars from 2016 to 2023.

New Delhi: Senior BCCI functionary Rajeev Shukla on Thursday asserted that it would not be right for India to pull out of the upcoming Champions Trophy in its act of defiance over the ICC’s revised financial model, saying such a move could see them isolated in world cricket. “Whatever has happened in Dubai is unfortunate. Whatever share we were demanding, we did not get that,” Shukla told ANI. “I think a way should be found out so that we get the revenue and we don’t have to boycott the Champions Trophy. It would be only our loss if we boycott the Champions Trophy. We should not be in haste to boycott the Champions Trophy. We should try to find out a way with the ICC so that we get our deserved revenue. We should be patient and should see that because of any step, we don’t get isolated in world cricket,” he added. READ: BCCI suffer major blows in ‘governance and constitutional changes’, revenue model

The ICC approved of a new financial model after its five-day meet in Dubai on Thursday, under which the BCCI will receive 293 million dollars from 2016 to 2023. Previously, the Board was drawing an amount of 570 million dollars due to its ‘Big Three’ formula. This will not go down well with the Indian board as the new model eats into its share.

ICC independent chairman Shashank Manohar had initially offered a compromise formula of an additional 100 million dollars, which would push the BCCI’s share to almost 400 million dollars. However, BCCI rejected this with a counter-offer under which it would still get its 570 million dollars but no other full member’s share would be reduced. With the new revenue model getting the nod, BCCI will now have to do with what they have in the eight-year cycle. The England Cricket Board received 143 million dollars while Zimbabwe Cricket received 94 million dollars. READ: ICC CT 2017: Are we going to England or not? , Indian players ask CoA members

The remaining seven Full Members will receive 132 million dollars each. The Associate Members will receive a funding of 280 million dollars. This model was passed by a vote of 13 to 1. On Wednesday, the prospect of India pulling out of this year’s Champions Trophy loomed larger after the BCCI lost both the governance and the revenue votes at the crucial ICC meet. The BCCI was the only member to object against a new financial model and was one of the only two countries to vote against the new governance changes.

The finance model received a 9-1 vote in favour, while the governance structure was passed by an 8-2 margin. The only country that voted alongside BCCI was Sri Lanka. BCCI office bearers- Amitabh Choudhury and treasurer Anirudh Chaudhry -had rejected the ICC’s settlement offer worth approximately 400 million USD – 100 million USD more the proposed 290 million USD. Their rejection came as BCCI wanted the share it was getting under the Big Three model, i.e. 570 million USD. However, it is understood that the other Full Members rejected the BCCI’s offer, leaving Choudhry in a tight position on Wednesday morning hours before the ICC Board meeting. READ: ICC willing to pay additional USD 100 million to BCCI from revamped revenue model

It should be noted that the ICC generates a higher percentage of revenue from India than any other cricket-playing nation. 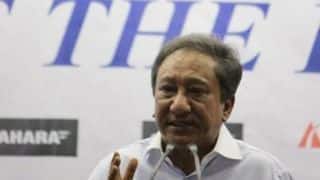